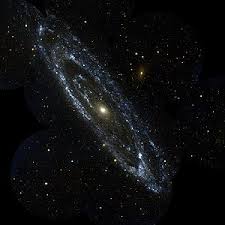 If The Problem of Evil is Christianity's greatest philosophical problem, The Distant Starlight Problem is Christianity's greatest scientific challenge. I believe both are the best of the best arguments against a Christian worldview, but I also believe both are answerable. Since we've already answered The Problem of Evil, let us now consider The Distant Starlight Problem.

For those who don't know, The Distant Starlight Problem is an objection levied against "Creationists" (those holding to a literal interpretation of Genesis) who maintain that the world is less than 10,000 years old based on the Biblical time frame (mostly from genealogies). The claim is made that, if the world is really less than 10,000 years old, then how can starlight get here in time when some stars are millions of light-years away? A light-year is the distance light travels in the length of one conventional "earth" year. It should be noted that this objection is really the only legitimate scientific critique (that I know of) that can be made of Creationism. All other arguments really come down to logical fallacies. In contrast, a Darwinian model for cosmology, biology, etc. has so many holes in it it's hard to know where to begin when criticizing it. The Darwinist relies on a myriad of "rescuing devices" to even keep his worldview afloat scientifically (which is why I recommend a presuppositional approach against Darwinists- because you can skip the rescuing devices and focus on the worldview's inherent self-contradictions). The Creationist really needs to come up with only one which accounts for the Starlight Problem.

The most universal rebuttal against Darwinists who will make this accusation is to respond, "God made the light in transit." In other words, God created the beam of light along with the star. While this has worked effectively at times to shut the mouths of those reproaching the faith, it has a problem. In order for this answer to be viable, it must account for things like supernovas and other phenomena. Is God the author of confusion? If He truly did create the light beam making the stars appear to be older than they are, why is it that He also creates "allusions" like supernovas? These events never really happened according to this alternative explanation. Of course, if you reduce everything down to, "God supernaturally made it work," then yes, you can "explain away" almost any objection. However, God reveals Himself in the pages of Scripture, and Scripture presents a God who is not the author of confusion. I believe there must be a better answer, and indeed I believe there is. Before continuing, I think it is worth noting that the Big Bang has problems of its own, namely the the Horizon Problem. If you place an ice cube in a cup of hot tea, the heat will become the same over time. The problem with the Big Bang is the Cosmic Microwave Background Radiation is constant throughout the universe, even though it shouldn't be given the proposed age of the universe. So to say that the Big-Bang is a viable alternative to creation only trades one problem for a similar one (actually a bundle of other ones).

Dr. Jason Lisle, in a technical article for Answers Research Journal promotes what he believes scientifically reconciles the discrepancy. In an article entitled Anisotropic Synchrony Convention - A Solution to the Distant Starlight Problem Lisle expounds upon ASC as being the most viable answer. In simple terms, ASC is basically analogous to the time-zone conventions we have on earth. You can leave Virginia at 4:00pm, and by virtue of time zones, arrive at your destination in Colorado also at 4:00pm. The same can be said of Cosmic Local Time (our earthly convention) and Cosmic Universal Time (The actual time difference). The stars could have been created on Day 4 Cosmic Local Time and reached the earth on Day 4 Cosmic Local Time. This would only work in one direction (i.e. like the plane flying West), and it would assume that the Bible uses Cosmic Local Time (our time on earth in relation to the sun).

For those who are more advanced in their scientific studies, I would suggest reading Dr. Lisle's paper on the subject. Even if you don't agree, you'll have to at least conclude that Creationism isn't "stupid" or something for the ignorant.

GTD is a theory that uses gravity to explain how light can travel over great distances in seemingly short time periods. An example used to explain this to individuals is the fact that the closer you are to the earth's center, the slower time is. For instance, time will flow on an atomic clock in Boulder Colorado at a slightly faster rate than a at a clock in Death Valley California. Experiments have been made with clocks in which a clock is placed on an airplane and taken around the world back to its original destination in which another clock on ground level is synchronized to it. After the flight however, the clocks are no longer synchronized. The one that remained at a higher altitude (away from the center of gravity) is faster. If we theorize that the earth is at or near the center of the universe then we can conclude that time is flowing at a slower rate where we are, as opposed to where the stars are.

CDK: Is the Speed of Light Constant in Time?

Another theory that attempts to reconcile Genesis with the perceived distance of stars is the CDK hypothesis which questions whether the speed of light is constant over time. The assumption is that the speed of light may have been greater in the past than it is in the present in which case starlight could have traversed an enormous distance in a relatively short period of time. Some have said this violates the theory of relativity, however the theory of relativity maintains that two individuals measuring the speed of a light beam will get the same result even if they are in different graphical positions, not that the speed of light has always been the same over time.

I hope that it can be seen that rescuing devices do exist that can reconcile the perceived distances of stars with the age of the earth. Whether one of these solutions, or a different one, or a combination of them answers the question, the fact remains that this argument against a literal Genesis is not a bullet-proof challenge at all. For more information about reconciling this problem I would advise taking a look at Dr. Jason Lisle's lecture The Distant Starlight Problem below, and/or purchasing Doctor Russell Humphrey's book

Starlight and Time which deals with Gravitational Time Dilation, available for purchase below.