A Few Thoughts on Those Defending Mohler's Firings at SBTS

Jon discusses some of the reactions from people who want to defend the firings, NDA's, etc.

Mega Edition: Al Mohler Fires Conservatives at SBTS, then A Discussion on Dating and Marriage

Jon takes a few moments to talk about Al Mohler's firing of four conservative professors at The Southern Baptist Theological Seminary. Then, he and Josh Sommer talk about dating, courtship, and marriage. Video: 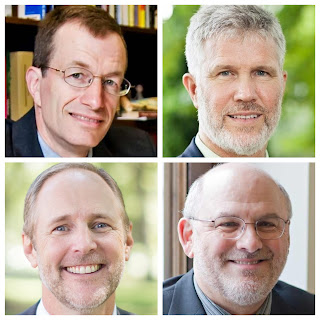 Yesterday, in an unprecedented move, Albert Mohler, the president of the Southern Baptist's flagship seminary in Louisville, KY, fired four of the remaining conservative professors at the institution. Russell Fuller, Theodore Cabal, Ken Magnuson, and Jim Orrick (who taught at Boyce College) were all terminated by provost Matthew Hall.  The seminary offered salary and benefits through July on the condition that non-disclosure agreements, requiring the withholding of potentially damaging information concerning the seminary and firing process, would be signed within forty-five days.

Russell Fuller became the only full-time Southern Baptist professor to sign the Dallas Statement on Social Justice one year ago. Critic of "New Calvinism," Jim Orrick, along with Cabal, and Magnuson have all stood against the advance of New Liberalism at the school. However, that resistance comes to an end today as the board of trustees almost unanimously voted for their termination in support of Albert Mohler's plan to cut cost during the Covid-19 quarantine.

Interestingly, various media outlets are reporting this week on Albert Mohler's endorsement of President Trump's reelection, a switch from his stated conviction four years ago. Left-leaning members of the convention, like Dwight McKissic have disapproved, while conservatives like Tom Buck have touted the decision. However, some have asked why Mohler fails to oppose those advocating shared Democrat ideas and policies in his own convention and at his own seminary.

Hershael York, Matt Hall, and Jarvis Williams have advocated teachings consistent with Critical Race Theory up until very recently. Curtis Woods, who chaired the resolutions committee which approved "Resolution 9" in 2019, employed "principles of critical race theory to guide" his 2018 dissertation at The Southern Baptist Theological Seminary. Woods left his job at the school over a month ago to work for the Kentucky Baptist Convention, but did so on his own accord.

Jonathan Pennington, another professor at SBTS, favors a "Gadamerian postmodern interpretation" of scripture and denies the "one true, objective meaning" derived from the text. Danny Akin, the president of Southeastern Baptist Theological Seminary, and Mohler protégé, recently advocated a watered-down version of a postmodern standpoint epistemology, which Critical Race Theory is based upon. Southeastern professors Walter Strickland, Miguel Echevvaria, Matthew Mullins, and William Branch, among others, have pulled their seminary in a leftward direction for some time.

Despite Al Mohler's changed position on Donald Trump, he has also purposefully ignored or supported liberals in his own convention and seminary while opposing or firing conservatives. Regardless of these confusing actions on Mohler's part, one thing is clear: The road ascending to the presidency of the denomination has been anything but a smooth ride for Mohler, and one wonders if he ever reaches the end of it, what kind of a convention will be left for him to lead?


Update 4:42 PM: Just received word Ken Magnuson's status is undetermined. He will find out in two weeks whether or not he's fired. He has been put on notice however.


I am proud to be the son of the God fearing man, Russell Fuller. On the week my Dad was unjustly fired from his job, I want to affirm this article as a good synopsis of who my Dad is.

First, he literally wrote the book on how to learn Biblical Hebrew. It is such a fantastic work that he got an award from Hebrew Union College and they now use his book to teach their students Biblical Hebrew.

Second, and most important, he is unafraid to take a stand for orthodoxy even if it means losing his job. He condemned publicly the wicked social justice movement that now rages among the faculty and leaders of Southern Seminary.

You can see evidence of the stand he took by his name being the only one from Southern Seminary affixed to the Dallas statement. And this was only the tip of the iceberg of the many public and private stands he took to keep Southern Seminary orthodox during his tenure. For more info on the various stands he made, just ask the myriad of students he has taught over the years or the few faithful professors who stood with him at Southern Seminary.

For standing for truth, my Dad was fired by the very school that utilizes the slogan “trusted for truth”. And in a final twist of irony, he was fired by the man he opposed so forcefully from being promoted to provost for his radically liberal views, the self avowed racist, Matt Hall.

Due to the economic crisis caused by the COVID-19 pandemic, the Southern Baptist Theological Seminary made the difficult decision this week to cut its budget by 30%. Staff and faculty layoffs were part of this cut and included me. I would normally have no need to address this issue, especially at a time when people are losing even loved ones.

But yesterday persons unknown to me described online my layoff as a purge of the last theologically conservative faculty at Southern. The idea that those remaining are heterodox shocked and angered me. The rest of the piece got worse, presenting many Southern Baptists I love and respect as if they were heretics. Before day’s end other bloggers repeated the falsehoods, but none consulted me regarding any of their content. I affirm my SBTS colleagues and the others I know to be exceedingly fine Christians in purity of life and doctrine. To besmirch them in this way is to reveal ignorance and/or dishonesty.

I bear no ill will toward SBTS over my layoff. Cheri and I are looking forward to what lies ahead. And we especially want to thank dear friends all over the world who have contacted us in love and encouragement.

Conversations That Matter Responded to this and other objections here:

Beth Moore recently threw away her "soft egalitarian" pass by publicly endorsing the calling of a woman preacher. Also, evangelical elites continue to ignore or pathetically address anti-Christian discrimination and bigotry while focusing on church abuse, anti-Asian racism, and online church. Jon talks about why the slogan, "The church is not the building, It's the people," can be a dangerous false dichotomy. Video: Audio: 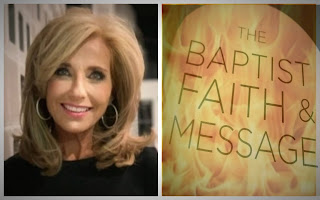 For the past year, Beth Moore regularly, publicly, and provocatively has tweeted about preaching in various venues, including churches. However, she has alluded questions about the office of a pastor. For many "soft complimentarians," an understanding of the office and function of a pastor as set forth in 1 Tim. 2 are separated to create room for women to preach without being "pastors." Beth Moore has long been able to function under this understanding while still escaping a direct confrontation with her denominations "Baptist Faith and Message 2000" which prohibits female pastors in no uncertain terms. However, recently, Moore abandoned her "escape clause" to specifically endorse the concept of female pastors as ordained by God. 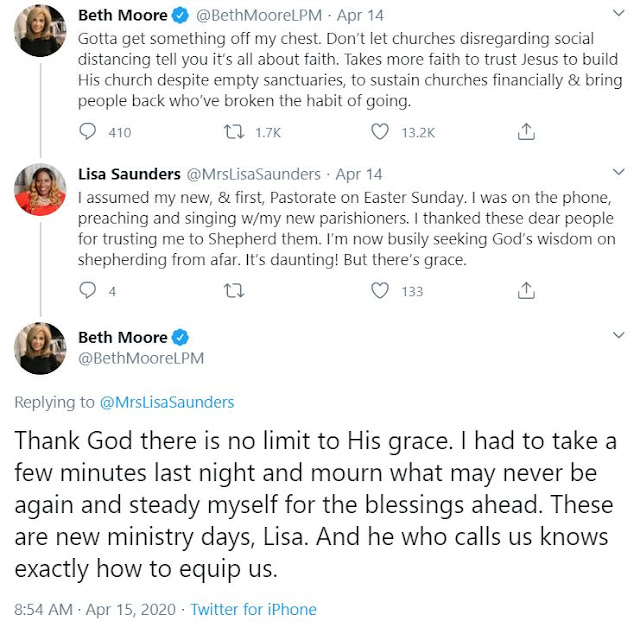 Here Moore affirms the calling of Lisa Saunders, as she specifically shares her struggle with receiving a "Pastorate" in the midst of the quarantine.

The question isn't what Beth Moore will do, but what will Southern Baptists, including Al Mohler, do?

The Social Justice Spin on Covid 19

Jon examines the new social justice spin some on the left are putting on the Covid-19 pandemic.

Did Martin Luther Inspire the Holocaust?

Jon takes a break from everything current to focus on a completely unrelated but interesting topic. We often hear Martin Luther inspired the holocaust, but is it true?
Video:

https://drive.google.com/file/d/1laTYQ0Dz8lOib9jacJM-JGhFLGxsFQCq/view?usp=sharing
Posted by Jon at 5:13 PM No comments:

What the Bible Says About Submission

Try this logic: 1. Husbands and Wives ". . . as the church is subject to Christ, so also the wives ought to be to their husbands in everything." Eph 5:24 Unless your husband asks you to sin, you should submit to him right? 2. Elders and Church Members "Obey your leaders and submit to them, for they keep watch over your souls . . ." Heb 13:17 Unless your elders asks you to sin, you should submit to them right? 3. Slaves and Masters "Slaves, in all things obey those who are your masters on earth . . ." Col 3:22 Unless your master asks you to sin, you should submit to him right? 4. Parents and Children "Children, be obedient to your parents in all things . . ." Col 3:20 Unless your parents asks you to sin, you should submit to them right? Or, do we recognize there are limits to their authority tethered to the role God has given them? Do we understand that there are levels of abuse wives, church members, slaves, and children are not required to willingly endure? This is common knowledge in these four areas. For example: - Husbands cannot tell their wives specifically how to do their job at work when that role is given to employers. - Church leaders shouldn't discipline children when that role is given to parents. How is someone required to submit in multiple areas supposed to adjudicate a conflict between authority structures placed over them? For example, a slave, church-member, and wife who is told three different things by three different God-given authorities in her life? The obvious answer in all of this is, submit to the authorities in their areas of authority over you. This logically necessitates undermining authoritative overreaches. The Bible is FILLED with such examples. - Abigail undermined her husband, Nabal, to submit to the king and the Lord. 1 Sam 25 - Aaron (a slave) undermined Pharoah (magisterial authority and slave master), in order to submit to Moses (Ecclesiastical authority) and God. Ex 7:9 - Jehoshabeath undermined her mother, Athaliah, to save Josiah. (2 Chron 22) - The Hebrew midwives (Ex 1) and Rahab (Josh 2) both undermined the governing authorities to save lives. - Daniel refused to change his public prayer habits to appease King Darius (Dan 6). In many of these cases (and more!) those challenging authority could have submitted and justified that their submission wasn't sinful.

Nothing in God's law said Daniel HAD to pray publicly.

Nothing in Gods law REQUIRED Abigail to help David.

Nothing in God's law said Rahab NEEDED to protect the spies.

Nothing in God's law MANDATED Jehoshabeath to hide Josiah.

They could have justified submitting to tyranny without sinning in each case. However, acted as if they were not REQUIRED to obey tyrannical overreach.

Russell Moore and ERLC understand this principle to some extent.
They have held a "Caring Well" conference to respond to what they see as abuse in the church. They don't say, "Women should just submit to the sinful desires of male leaders because it's not their sin."

Instead, they actually rightly understand that women are not required to comply with, in this case, sinful commands.

Why then, do we have such a hard time applying this same principle to Rom 13:1?

"Every person is to be in subjection to the governing authorities."
If we support examples of slaves, children, wives, and church members, deviating from submission to various hierarchies of which submission is REQUIRED, because those authorities have exceeded their role, why can't we carry this principle over into the realm of government?
Posted by Jon at 9:38 AM No comments: