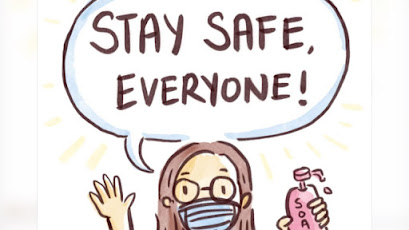 Have you noticed that essentially everyone you talk to in 2020, whether it be in person, on the phone or talking to you from the radio will add in at the end of the conversation the parting words, “stay safe.” Indeed, this has undoubtedly become the motto of at least the first half of 2020. On its face, the farewell seems like what those who say it intend – a kind gesture that invokes the hope that you will not get sick with the COVID-19 virus; that you will remain healthy. Yet the word “healthy” is not used. Somewhere over the last few months, we started to say “safe” instead of “healthy.” Why do we say “safe?”

In the realm of psycholinguistics, linguists try to theorize about how things like word choice, meaning, register or dialect influence individual or group perceptions about language. Often this takes research into the fascinating field of dialectology – how populations of different geographic and social regions speak in different ways, and how those difference influences the way they live, think and speak. With modern media attaining the capability of communicating to populations on mass, we’ve seen in many ways the disintegration of specific regional dialects in favor of a normalized “American” way of speaking, or perhaps more realistically, in favor of specifically favored dialects to the disadvantage of others (for example, the perception of the American Southern dialect as being indicative of ignorance has led to a rise in de-accenting services for individuals with that dialect to change to a more normalized American one)[i]. One of the resulting phenomena that have come from mass media is the normalization of spoken American English – this has led to nearly identical accents developing in young people, from recent immigrants to the children of those with thick regional accents.

While it’s possible that widespread media induced accent normalization is more recent in its prominence, media induced sayings are most definitely not. Often during times of peril, whether during war or natural disaster, specific sayings rise to prominence while being driven by government encouragement (“lose lips sink ships,” “keep calm and carry on,” etc.). The current public health predicament has delivered a number of clever maxims to be oft repeated over radio waves, on billboards and over WIFI – “do your part, stay six feet apart,” “we’re all in this together,” “stay home, stop the spread,” “stay home, stay safe.” Each of these phrases are designed to enforce a way of thinking among all who hear them, namely to take COVID-19 seriously, but of all of them “stay safe” seem probably the most run of the mill and typical. However, the mere choice of saying, “safe” has probably caused more paranoia in a subconscious sense than perhaps any of the others. To understand how, we need to examine what linguists call the “semantic load” (all the meaning that is “loaded” into a particular word) of both “healthy” and “safe.”

When someone says, “stay healthy,” they are making an obvious and straightforward imperative. While “stay healthy” could be said at any time, the context of the Pandemic renders the phrase to essentially mean, “Don’t get Coronavirus.” The term “healthy” is specific enough that it really can only pertain to one’s physical state. In contrast, saying, “stay safe” doesn’t quite elicit the same meaning – the meanings are close, but there is a difference between “healthy” and “safe.” What is the difference?

To begin with, the word “safe” has a broader meaning than “healthy” does. Safety may include health but is definitely not limited to it. (though it may be argued that this difference is even starker in other languages, for example in Spanish where “safe” is translated as “segura” which also means “secure,” and healthy is translated as “saludable,” or “wholesome”). When used pre-COVID-19, “safe” would most often be used, in the English language, to refer to a “safe neighborhood” or a “safe trip” – rarely was it used specifically to refer to someone staying healthy. Why is this? Safe is an adjective, but it has morphed over time from a verb (to save, from the Latin salvus[ii]). To “save” means to rescue or protect someone or something – it denotes being “uninjured.” In usual contexts, “safe” almost always refers to protection from potential, usually immediate, physical harm – a criminal, an enemy, a dangerous animal – it is a far more broad term than “healthy,” and again, it can include health, but it still typically sticks to more physically present threats, ones that can be seen, heard, touched and imagined much more easily than a virus. We know the effects of a virus, but few have actually seen the physical virus under a microscope, and so our association with illness is much more abstract than with, for example, a hungry, angry bear in the woods that we want to “stay safe” from. To put this idea to the test, imagine any other illness – the flu, measles or a norovirus outbreak in your local community – could you imagine yourself saying, “stay safe” to a fellow community member while bidding them adieu? It sounds and seems awkward; you would instead say, “Stay healthy.” Thus it is clearly seen that we collectively say “stay safe” not because that’s what we say when there’s an outbreak of illness, but because of the scope of this particular illness – or is there another reason?

What is the psychological effect of saying “safe” instead of saying “healthy”? Basically, it adds urgency and somewhat of a personification to the Coronavirus – it isn’t a strain of illness that we hope to be kept from getting – instead it’s a “silent killer” that lurks on every surface and behind every face mask outside our home. A survivability rate of 99.98% will do nothing to alleviate our fears because it’s a physical, personified threat to us every moment of every day. The paranoia that the word choice cultivates is supported by every news report we watch, every mask being worn that we see while we’re out and constant image of a nefarious looking red virus blown up to poster size.

When considering ways to lessen or even eliminate one’s own paranoia over the COVID-19 outbreak, there are a number of strategies that can be implemented to varying success. While turning off the TV, putting the phone on silent and getting some fresh air outside unmasked may all be effective, don’t forget your speech – it can solidify your way of thinking even without you realizing it. Stay healthy.