A Compassionate Argument for a Strict Border Part 1: Assimilation 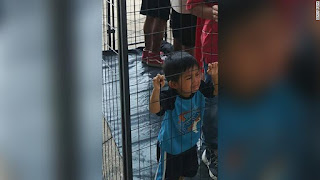 A heartwrenching scene: a young child stands with his hands wrapped around the bars of a small and constrictive cage. He sobs because he has been separated from his mother and father, they being placed in another detention camp, possibly hundreds of miles away. It is indeed a shocking sight – except it’s not real. It was taken at a leftist political demonstration to protest Trump’s border policy – it doesn’t reflect reality in the way that the tweeters wish it to. Again, a series of photos surface showing children being kept in larger chain link “cages” of sorts – the outrage is immediate and loud. The Trump Administration must answer for these crimes! Except the photos were taken in 2014 – during the Obama Administration, and demonstrate policy in place from that administration to this point – the outrage shifts, but does not silence or even lower in volume. Why? Because the President is racist, xenophobic, etc., and the laws he and some of the more hardline supporters of a secure border are the outflow of this racism and xenophobia. At least that’s what an alien in a distant universe might think if they only are able to intercept intergalactic radio waves carrying virtually any major news source.

We should be smart about how and when we are outraged by something. This was true during the Obama years and every previous government administrations from the beginning of time, and it’s still true today. That being said, it’s incredibly sad to see so many people being “straight up duped” by what they read and hear through the media into counterfeit outrage that acts like a drug in their system, convincing them even more that they’re right and everyone who disagrees with them is not only deathly wrong but also evil. It’s even sadder when there are throngs of among the outraged masses thinking that their outrage is somehow justified by a moral, biblical perspective because in their minds they are “supporting justice,” “standing up for the downtrodden,” or “welcoming the sojourner.” If you are one of these outraged, this piece is for you. While I don’t want you to be unnecessarily offended, if you are, then it is necessary – my hope is to bring true, actual compassion and charity to an issue that many are using as an excuse to metaphorically beat other Americans over the head for “not being compassionate.” My thesis is straightforward: a stricter border policy for the United States is far more compassionate than a loose and lax one. I will make this argument through several lines of reasoning, but I should fully disclose that I am coming from a biblical perspective, one that values above all things treating others “how they would want to be treated.” If my reasoning seems cold at times it is only because I am following logical conclusions to get to what is most important: the truth of how to best serve, love and protect our fellow man because they are made in the image and likeness of God.

So let’s get specific: it is very much in vogue among certain circles of the “values voters” and the evangelical community to stand in opposition to stricter border policy with the reasoning that these policies (secure border, selective immigration, etc.) are innately racist and/or do not reflect the biblical principle of “welcoming the sojourner.” While the interest in caring for those of other lands in less than desirable economic/political/cultural conditions is admirable, there is no moral high ground to be had by opposing secure border policy. In fact, if one peels back the emotional layers, opposing a secure border and stricter immigration policy is downright cruel. Why? There are many reasons. I want to deal with two, both dealing with the idea of incentive in these two categories: 1) incentive for immigrants to come to the US, and 2) incentive for US citizens to care for those of other nations.

Before directly discussing incentive, I want to examine the question of why migrants come to the US in general (legally and illegally). Why do people leave their place of birth, life and root to come to a new place? Population movements throughout history have occurred for any number of reasons (many times being forced), but the overwhelming incentive for those coming to US as of now must be chiefly economic opportunity – with a far smaller percentage for reasons related to freedom of speech, expression and association. What does this mean? From an economic standpoint this is fairly straightforward: unemployment almost demands immigration – this is what happens when an economy thrives. In fact, with the lack of skilled laborers in the US at this time, labor pools from other nations will have to be tapped into, as other nations do throughout the world (If you want proof of this, look on a website for a country that is actively searching for immigrants like New Zealand – there are incentives and jobs to be had, but only to those with specific skills). While there is fear that migrants could “steal” jobs from Americans, the fear subsides with low unemployment, a resulting factor of lower taxes and regulation. By this train of economic reasoning (which, I might add is also founded on the biblical principles of private property and the command “thou shall not steal”), the economic policies of redistribution, high taxes and high regulation actually lead directly to ant-immigration sentiment as they become the target of anger by unemployed natives. 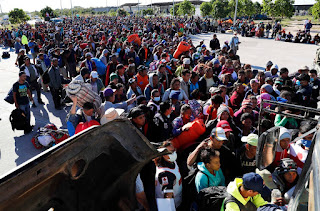 However, there is a problem of a somewhat different variety that arises from immigrants coming for economic reasons – there is not the same drive for cultural assimilation. An immigrant who leaves one country for another because they’re fleeing an oppressive regime or culture typically embraces the place they’re fleeing too – after all, the difference in the administration of law is the point of their move to begin with. When one moves only for economic reasons, the drive for assimilation is much less, leading to lethargy toward adopting the culture, language and worst of all, civics of that place. This is not at all to say that all those who come to the US for economic opportunity don’t contribute positively in to the nation, only to say that the trend of merely chasing dollars and cents does not lend itself well to cultural assimilation. Now, a decent argument could be made that many immigrating to the US are actually bringing superior culture in some instances – I’d be willing to accept that premise on a case by case basis, but it doesn’t negate the consequences of a massively unassimilated migrant community. The obvious question/objection is this: why is assimilation important or even good? The answer is simple: the US is particular nation with a particular system of law and government. This system has yielded, in general, a peaceful nation. The working of our system requires a populace that subscribes and understands the laws that make it work. The laws are based on a common culture that has traditionally valued them. The culture is based in a common language, history and values system. Assimilation is necessary not only for the thriving of the nation, but also the thriving of those entering to it.

While there are a host of negative consequences that arise from a lack of assimilation, one receiving little attention from the conservative side of the immigration debate is the Democrat monopoly on immigrant voters. Why this trend? Well, for starters, when someone comes to the United States their primary interactions are with government run institutions – immigration bureau offices, the school system, community volunteer organizations, etc. – the bulk of these being run by urban, Democrat volunteers, or more often than not, paid government employees. How do I know? Because I have worked in some of these bureaucracies for years. The monopoly is held tight through an aggressive program built upon a firm subscription to the idea of multiculturalism that leads to a lack of assimilation (because if all cultures are equally valid and good, there’s no reason anyone should change or adjust their own regardless of where they come from).

It often works like this: (and I have asked many immigrants from Hispanic countries concerning these trends) an immigrant arrives in the US. He is shown the ropes of his new nation by both a plurality of government bureaucracies and by members of his own culture already there. As he is guided in the citizenship process, he is taught American History primarily by democrats, encouraged to vote by democrats and then his community tells him to “be Hispanic” in the US is to vote Democrat. Why would anyone be surprised that he votes Democrat with nearly every voice telling him to do so? To add insult to injury, the left-leaning folks who helped him are directly at odds with the community he’s a part of on even more crucial issues – they just don’t bother to tell him. For example, polls have shown that Hispanic voters are typically pro-life and pro-traditional marriage – issues that should be at the forefront of their voting decisions, but are so often ignored in favor of economic issues like “affordable housing” (which is essentially code for redistributionism, a policy that negatively affects any immigrants wishing to grow businesses and increase personal wealth in the US). Perhaps if the new arrival had been forced to assimilate more, he wouldn’t be voting for a party that openly supports things he detests from a moral standpoint.

Above all, it should be noted that assimilation is good for the person being assimilated, at least in the United States, thought this is not only true here. If YOU ever move to a foreign country, you should do your best to assimilate in the areas that are important – this does not mean that you change your worldview, but you adopt the language, traditions and civics that do not conflict with your conscience – after all, if you weren’t willing to, why did you move there to begin with?

In part 2 we will begin to look more specifically at the idea of incentive and how it determines who and why come across the border.