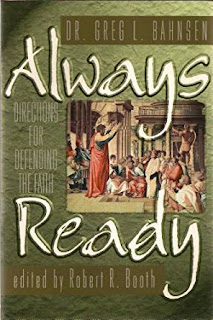 
I suppose when most Christians refer to certain defenses made on behalf of Christianity, they tend to recommend specific lectures or books by learned apologists on the particular subject. For instance, a book on the problem of evil may be recommended separately from a book on the cosmological argument for God’s existence. Greg Bahnsen’s Always Ready

however, smashes this compartmentalization of Christian apologetics. It really is, “All right there!” I wholeheartedly recommend Bahsen’s work as not only concise and to the point, but also far-reaching an exhaustive in its simplicity. I do believe it’s the best single academic and pragmatic book I’ve ever read on the subject of apologetics. So what’s so great about Always Ready

and how does it differ from other books on defending the faith? There are four reasons I tout this product above the competition.

I don’t know about you, but I get frustrated when I read any work of Theology- including apologetic material- only to find that Scripture isn’t even used to support the main thesis. There often exists a disconnect between the “ends” and the “means” in Christian’s interaction with culture, and I at least partially fault “philosophical” books about Theology (i.e. books that support a Biblical assertion without first building the support itself on top of Bible passages). In the realm of law and government this thinking is horrendously common. “Let’s use humanism against the humanists” is really the strategy of most Christian lawyers and politicians. They want to support a Christian end such as outlawing abortions, without making their arguments from Scripture verses (Psalm 127:3, Psalm 22:10-11, etc.) and doctrines (man’s intrinsic worth rooted in his position as an “image bearer,” God’s commands against murder, etc.). Instead they’ll rely completely upon court “precedent” and statistical surveys (i.e. It’s what the people want!). I’ve listened to and read many apologetic works that do the same exact thing. They’ll use philosophical arguments to prove Scripture. The “Free-will” defense is an extremely common philosophical rebuttal to those who would accuse God of being unloving, however where does Scripture ever make such a case? Both the book of Job and the book of Romans make it quite clear that man has no standing to act as God’s judge, yet the majority of apologists want so desperately to act as God’s defendant using arguments He hasn’t even given them.
Dr. Bahnsen is a breath of fresh air after being exposed to so many humanist-flirting Christians. He unequivocally takes his stand upon Scripture itself and denies any inkling of a notion which would even start to ponder the possibility of proving Biblical authority without first presupposing it. Many astute individuals will at this point make the accusation, “That’s circular argumentation!” And in a sense it is. But as I expanded on previously in my remarks concerning John Frame’s book Apologetics to the Glory of God, “A circular argument is actually quite unavoidable when referring back to our ultimate authority.” Every worldview- no matter what it is- argues in a “broad” circle such that the adherent assumes at the outset that what he is defending is true. If this were not the case, a rationalist could not use reason to argue for rationalism, an empiricist could not use science to prove science, etc. All philosophical systems therefore need a “final authority” which is self-authenticating. This is the way Yahweh, which means “self-sufficient one,” presents Himself to Moses in the burning bush. Bahnsen recognizes this fact and starts off his central thesis by correlating many of the passages that explicitly teach the supremacy of Christ as our logical starting point. Col. 2:3 presents “Christ Himself” as the one “in whom are hidden all the treasures of wisdom and knowledge.” If our starting point for epistemology (the study of truth) is not Christ than we committing the sin of idolatry. Paul warns that Christ should be our starting point so that as verse 4 indicates, “no one may delude [us] with persuasive argument.” And what kind of persuasive argument are we referring to? Verse 8 describes it as the “elementary” principles of the world. Paul writes, “See to it that no one takes you captive through philosophy and empty deception, according to the tradition of men, according to the elementary principles of the world, rather than according to Christ.” King Solomon stated it this way in Proverbs 1:7, “The fear of the Lord is the beginning of knowledge; Fools despise wisdom and instruction.” For the Christian, “every thought,” as 1 Cor. 10:5 states, should be “captive to the obedience of Christ.” Therefore our philosophical starting point, our “elementary principle,” our verification for all truth, our “final authority,” is the Word of God. Therefore, Bahnsen’s starting point is the Bible.

Bahnsen is not willing to concede any philosophical ground as “neutral” territory. He recognizes the fact that one cannot “serve two Masters” for he will either “hate the one” or “love the other.” If Christians for a moment give nonbelievers the upper hand in this they’ve lost the battle at the outset, for what they are saying, “We are autonomous.” In other words, “We can arrive at truth without a precommitment to God.” This methodology seems contrary to the apologetics of Paul on Mar’s Hill, who “pushed the antithesis,” labeling the unbelievers as “ignorant” and preaching what the Athenians already knew in their heart of hearts though they were suppressing it; that God is “not far from each one of us.” According to Bahnsen, Paul was following the example set forth in Proverbs 26:4-5 to “not answer a fool according to his folly, lest you also be like him. [but instead to] Answer a fool as his folly deserves, lest he be wise in his own eyes.” If we accepted the nonbeliever’s pressupositions whatever they may be, we are essentially answering a fool according to his folly. We are “like him” because we’re making the same mistake he’s making. If Paul were to concede polytheism at the outset he would have lost. If he were to have conceded Gnosticism he would have lost. So why do we concede empiricism? Why do we set about to give historical or scientific evidence that will lead someone to Christ by their own reason according to their own standards of autonomous empiricism. More frequent now among the laity is the concession of pragmatic postmodernism. “Christ works for me, maybe He’ll work for you too!” These approaches answer a fool according to his folly. What we should do instead is, “Answer a fool as his folly deserves.” This means showing him or her that they can’t live by their own philosophy. Their worldview possesses internal inconsistences and is self-refuting. It can’t even live up to its own standard of measure. On the other hand, the Christian worldview is without inconsistencies and does live up to its epistomological standards. It corresponds to reality, and even non-Christians must assume the God of the Bible to be true in order for reality to be intelligable at all. God is supremely over us “for in Him we live and move and exist.” Our pressupositions (things we assume to be true without proof) can only be Christian if we are to be rational.

Bahnsen’s writings may take a little bit to get use to, but they are much more understandable than many of the other presuppositional writers. Van Til and Frame seem infinitely more confusing than Bahnsen does at explaining the preconditions for intelligibility, etc. The only author off-hand who may be simpler is Dr. Jason Lisle, however, Lisle in his book The Ultimate Proof of Creation

, does not go into as much detail as Bahnsen does.Bahnsen manages to exegete Acts 17, expound upon the impossibility of philosophical “neutrality,” explain the preconditions for intelligibility, preach on the attitude and purpose an apologist must have, teach the “don’t answer, answer” strategy, explain the transcendental argument (The proof for God’s existence is that without Him we couldn’t prove anything), talk about logical fallacies, and answer the problems of evil, faith, miracles, etc. in a 274 page book. I guarantee once you learn the strategies herein you’ll want to share them with your unsaved friends and coworkers. They’re powerful, full-proof, and Biblical.

Bahnsen emphasizes the fact that evangelism and apologetics are inseparable. We aren’t using mind games to diffuse another’s worldview for our own enjoyment or superiority. We are to be humble, respectful, and above all Gospel-focused. This is the reason he includes an exegetical insight on Acts 17. We need to follow in Paul’s footsteps and preach the truth of God’s Word, not man’s wisdom. This book is an essential part of any apologist’s training, and since all Christians are to be apologists, we should all read this book. I would have to say in all seriousness, that if you could purchase any book to read and keep in your library on apologetics, I believe this would be the book to have because of its powerful message and practical method.