As reported last week, four prominent seminary presidents, including Al Mohler, publicly attacked the trailer for “By What Standard,” a documentary aimed at exposing the dangers of social justice in the Southern Baptist Convention. Their reason? It was too divisive, dishonest, and disrespectful.

Though most of the identifiable examples of error came from lesser known figures, with the exception of Beth Moore, the documentary planned to include agreed-upon interview footage from all four presidents.

I made the point on Friday evening, that for the last few years it’s been common in evangelical incorporated to refer to social justice as a “gospel issue.” Welcoming refugees, fighting climate change, racial reconciliation, and making churches safe spaces for “sexual minorities,” have all been hailed as somehow connected with the good news that Christ has taken God’s wrath for those who repent and place their faith in Him.

Frequently, social justice has been directly defined as the gospel itself. 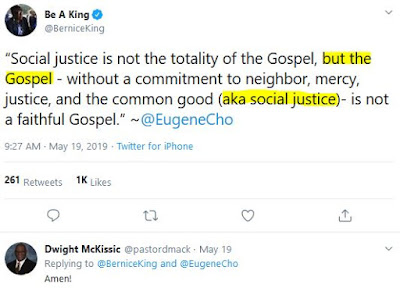 One example, I highlighted came directly from Southern Seminary provost Matthew Hall who stated in an article entitled “Breaking the Silence”:

. . . we desperately need these same [white] churches to see what Christ would require of us when we see black boys and men gunned down in ways that bear evidence of a racialized double standard in our communities. Here’s the thing: reconciliation is at the center of the gospel and God’s design for the church. It’s not an optional “upgrade” to standard Christianity just for some. It is the basic path Christ calls every one of his disciples to follow.

By simple deduction, those claiming social justice is necessary for the gospel are also saying that those who oppose social justice have an incomplete or nonexistent gospel. Al Mohler’s provost is no exception. Yet, while the long knives are brandished in the face of Founder’s Ministries, none of the four presidents have yet to publicly rebuke any on the social justice side for tweaking the gospel itself.

Instead, it appears they’ve decided to scrub their websites. Not only was Matthew Hall’s article deleted, but so was a video in which Hall claimed that “Racism is really about a systemic and structural ideology, an idea that affects the way power is distributed.”This behavior mirrors the way Southeastern Seminary suspiciously took down 90% of their material from the Kingdom Diversity initiative after a small portion was exposed in a 38-page document of direct quotes from various public talks and articles.

Rather than publicly repudiate the promotion of critical race theory, Southern Baptist elites have attempted to minimize opportunity for criticism while blasting those who point out the obvious. Matthew Hall is still Al Mohler’s provost, on track to eventually replace Mohler as the president of Southern Seminary. 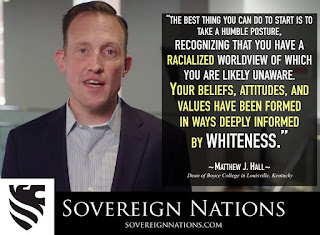 One thing is certain: “. . . whatever you have said in the dark will be heard in the light, and what you have whispered in the inner rooms will be proclaimed upon the housetops.” With your support, the Enemies Within the Church project will expose the false teaching, Leftist money, and movers and shakers behind the deceptive Christian social justice movement.