You sit down in the theater. The film begins. Scene one: A young man in a British Infantry uniform stares across the room of a busy health clinic at a pretty young nurse with auburn hair, bright red lipstick and perfectly styled hair, giving inoculations to other young soldiers. When the young man finally arrives at the nurse’s station, he starts flirting with her in an innocent and adorable fashion. She is annoyed at first, but her defenses slowly start to fall until she gradually gives into his charms. The film then spends about 20 minutes telling how the two young people fall in love, making allusions through flashbacks to the young man’s difficult childhood. After a brief training montage where we learn the quarks and characters of five or six other young soldiers in the young man’s division (plus a salty old sergeant who treats the men roughly in their presence but talks fondly of them to superior officers), the two lovers get married in a rush, as the division is shipping out to fight Germany in the morning. Once the enemy has been properly demonized through a brief scene depicting a particular war crime (executing prisoners, civilians, etc.), we engage in the second half of the film, a series of gratuitously violent sequences where one after another, the main characters of the division meeting grizzly ends, one-by-one until an expected “last stand” sequence where the young man proves his bravery. 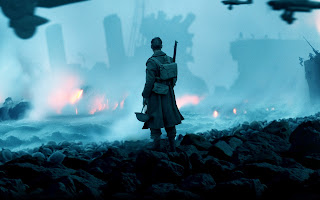