Answers to the “BIG” Questions of Life
By: Jonathan Harris

The Prerequisite: Obedience to God 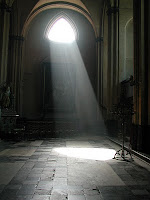 What is God’s will? Everyone seems to be looking for it but no one seems to actually know what it is. Some look for a mystical experience, others for divine intervention through the opening and closing of figurative “doors,” while still others ask someone they respect what their opinion is. Whether it’s buying a car, marrying a spouse, choosing a career, or going to a college, the will of God is often asked for but seldom understood. What should a Christian expect when asking God to reveal His will?

In John MacArthur’s sermon Knowing God’s Will five principles from Scripture are outlined. God’s will for all Christians is that they be saved (1 Timothy 2:3-4; 2 Peter 3:9), spirit-filled (Ephesians 5:17-18), sanctified (1 Thessalonians 4:3-7), submissive (1 Peter 2:13-15), suffering (Philippians 1:29; 2 Timothy 3:12), and saying thanks (1 Thessalonians 5:18). It is noteworthy that David wasn’t on some euphoric quest to find God’s will. He prayed in Psalm 143:10 to “do” the will of God, not find it. To David it was something already found. To us it should be the same. God’s will is not something we should be going on a wild goose chase to find. Rather it is revealed within the pages of Scripture. Once God’s will is being followed according to the Scripture, a Christian is free to do whatever he or she wants to do. Psalm 37:4 states, “Delight yourself in the Lord and He will give you the desires of your heart.” If a Christian is spirit-filled, sanctified, submissive, suffering, and saying thanks, he or she is delighting them-self in God, and therefore their desires are His desires. As a perquisite for understanding the rest of this treatise on finding God’s will, I would highly recommend either listening to Dr. MacArthur’s sermon Knowing God’s Will, and/or looking up the aforementioned verses.

We will boil down the preceding six principles into the word “obedience.” If you are being obedient to God, you can make whatever decision you want. I found myself last week in a rather awkward position. I believe I was being obedient to God, yet I didn’t know what I wanted to do exactly. The story I’m about to tell may cause you to think of myself as either an expert in God’s will, or it may cause you to leave this page with the conclusion that I don’t know what I’m talking about. Still, I believe I need to tell it so that people can have an understanding of the context in which I approach the question of God’s will.

All my life I’ve been interested in politics so it seemed natural that I would either get involved with a political non-profit or go to law school. The Leadership Institute in D.C. offer me a job last year managing conservative groups on college campuses, however I turned it down. I wasn’t quite finished with my undergraduate degree, and I had growing doubts as to the usefulness of political solutions to a problem I was beginning to see as more religious. At that point I still had a rather compartmentalized view of life. I saw religion in one category, and “secular” activities such as politics in another. Fast forward six months and I’m checking out Liberty Law School in Virginia. While I was starting to see political issues more in religious terms I still wanted to hold on to a career focused on beating up those rascally liberals! I specifically chose Liberty University because I could double major in Theology thereby placing my eggs in two baskets so to speak. If I didn’t like one basket I’d simply cross over and put them all in the other one. This plan was my safety. God fortunately had other plans for me. During the spring and summer I read a number of books-some recommended by the university, others I personally chose- that challenged my compartmentalized view of politics. I found that religion determines politics. This of course commenced the pendulum in my life to swing from political solutions more and more to the under-girding religious ones. Three days before leaving for Law school I found out that the president of the seminary had been caught in a scandal. The more questions I asked the more damning the scandal became until I couldn’t justify ever attending such an institution. For two weeks I wrestled with God. My eggs were now in one basket and my heart wasn’t with them. Though the college was Christian, the bar exam does not test based on God’s moral standard. I realized fairly soon that I was in the process of memorizing a system I wanted to see destroyed. Though our system of justice was based on Christianity at one time, those times are long gone, and stare decisis- the doctrine of case law- has become nothing more than a humanistic perversion of what justice should be. This was the hardest decision of my life. I loved the area, the people, the professors, and the school. Yet I couldn’t see myself spending my life frustrating myself with a system I wanted to see destroyed. Still, if I stuck with it I could have money, security, comfort, and respect. The verse that kept coming to me during this period was Matthew 6:32 which states, “For all these things the Gentiles eagerly seek; for your heavenly Father knows that you need all these things.” Again surfaced my longing to go to seminary, and again I argued with God about it. Up until two years ago seminary was the last place I would have ever wanted to attend. I wanted to do “big” things, and the way to do big things was to make my mark in the political system, or so I thought. I find myself writing this one week after I withdrew from the law program looking forward to what God will do next. I needed to experience the crises of coming to grips with His plan for my life by pursuing my dream for two weeks. As hard as it is to look at the “wasted” time and resources, I realize that they are the price of learning a good lesson.

One of the passages that continually came to mind as I prayed “Lord, what would you have me do?” was John 21:16-17 in which Jesus, upon Peter’s affirmation of love for Him, stated, “Feed my sheep.” Inevitably I’m looking at attending seminary next semester. I tend to be very skeptical of mystical approaches to finding God’s will. What’s stated plainly in Scripture comes first. However, after obedience to God, the Holy Spirit, I believe, will illuminate certain passages for emphasis. This is my main point: You must examine your motives and compare them to Scripture! Motives are sometimes the hardest things to pinpoint and come to terms with because we are so good at deceiving ourselves. It wasn’t until I realized what my primary motives for attending law school had become that I knew it wasn’t the best for me, at least at this point in my life. Christ affirmed God’s monopoly on knowing man’s motivations in Luke 16:15 where He stated, “You are those who justify yourselves in the sight of men, but God knows your hearts; for that which is highly esteemed among men is detestable in the sight of God.” Samuel in choosing a king for Israel said, “for God sees not as man sees, for man looks at the outward appearance, but the Lord looks at the heart.” This is why David wisely sought God’s knowledge of himself. In Psalm 139:23-24 he inquires, “Search me, O God, and know my heart; Try me and know my anxious thoughts; And see if there be any hurtful way in me, And lead me in the everlasting way.” I want to emphasize that this is not a haphazard request for God to stop you from making a bad choice when He gets around to it. This is a desperate helpless cry from the heart itself. It takes a humble and holy spirit to even expect a response from God on this issue.  James 4:6 points out, “God is opposed to the proud, but gives grace to the humble.” Again, Psalm 66:18 says, “If I regard wickedness in my heart, the Lord will not hear.” If you are to ask God to reveal your motives, you must be serious about wanting an answer. I am fully confident that the Lord will give you an answer by revealing them, however, His answer may not seem clear-cut or convenient, though you will mature as a result.

Consider it all joy, my brethren, when you encounter various trials, knowing that the testing of your faith produces endurance. And let endurance have its perfect result, that you may be perfect and complete, lacking in nothing. James 1:2-4

The passage goes on to state,

But if any of you lacks wisdom, let him ask of God, who gives to all men generously and without reproach, and it will be given to him. But let him ask in faith without any doubting, for the one who doubts is like the surf of the sea driven and tossed by the wind. James 1:5-6

Along with humility and holiness there must be faith in order to obtain wisdom. You must actually trust that God will deliver what He wishes to reveal which will never be to little information. One of the most important things you can do when seeking to make an important decision is surround yourself with godly advice. Psalm 1:1 makes it clear that God doesn’t want us to “walk in the counsel of the wicked, Nor stand in the path of sinners, Nor sit in the seat of scoffers!” However God does want us to obtain wise counsel. Proverbs 15:22 says, “Without consultation, plans are frustrated, But with many counselors they succeed.” Again Proverbs 19:20 instructs, “Listen to counsel and accept discipline, That you may be wise the rest of your days.” Whenever I make a big decision I have always followed this principle and it hasn’t let me down yet. Part of my decision to not continue law school was due to those I respected encouraging me to think outside my conception of a comfortable career and pointing out my ministerial gifts.

I believe there are situations in which a “right” choice may not be clear. To give a rather menial example: If you are going to tell a friend about a new car you bought and you have the choice of contacting him by phone or by skype (internet phone) there probably isn’t a “right” choice. The same can sometimes be true of bigger decisions. It never says in Scripture that there’s a perfect sole-mate. Rather there are qualifications stated by which we are given the freedom to make a decision in regards to who to marry. The last important principle I would like to highlight is perhaps the most relaxing. We can’t mess God up! No matter what decision you make, as long as you are obedient to God in the areas He instructs you on through His Word, there is no way you will ever be able to make a mistake He didn’t know about or can’t fix. Proverbs 16:9 says, “The mind of man plans his way, But the Lord directs his steps.” This should cause us as Christians to have great comfort and confidence as we rest in the sovereignty of our Lord. No decision is to small for Him to know about, and no mistake is to small for Him to correct. So as you make your big life decisions realize that God knows the “end from the beginning” and has predestined you to do His will. He can adjust the circumstances. All he asks is that you be obedient.