Moore to the Point: Why Many Evangelical Leaders Are Selling Out 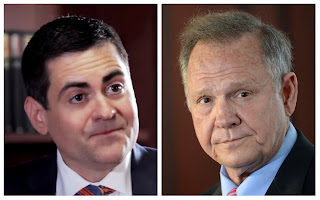 For the past few years a growing segment of evangelical leadership has been marching toward the left culminating most recently in staunch opposition to and the defeat of Alabama senatorial candidate Roy Moore. To illustrate, I know of at least three statements denouncing the “Alt Right,” either originating with or supported by prominent Southern Baptist leaders during this year alone. You can read them here https://www.unifyingleadership.org, here https://static.coreapps.net/sbc-am2017/documents/f618b2f02b1fc085697b4f5d147cb58e.pdf, and here https://thewitnessbcc.com/charlottesville-declaration-appeal-church-america/ Let’s examine for a moment the most recent statement to show what I mean.

The title is, “OPEN LETTER TO PRESIDENT TRUMP FROM AMERICAN RELIGIOUS LEADERS: WE NEED YOU TO SPEAK.” Here are a few important observations. First is the lack of similar statements made regarding President Obama. There was the Manhattan Declaration, but that did not single Obama out. So there exists one statement I can think of against the Left within eight years, and we already have three statements made against the almost undefinable “Alt Right” and Donald Trump within less than one year. What does this tell us about the level of moral outrage? Is it more grievous to Christians that a president has a few people in his cabinet that CNN calls racist, or that a president pushes transgender bathroom policy and unrestricted abortion?

It is noteworthy that two of the signers at my seminary, one of whom is an author of the statement itself, could not give the names of all three of the supposed “Alt Right” operatives in Trump’s cabinet when asked by the media to do so. This brings me to a second observation. If you read the statement carefully, you will find not only that the Constitution is misconstrued as an egalitarian document, but in the one place Scripture is quoted, it is taking out of context and recruited, ironically, in the cause of Licolnian nationalism. It is impossible for this sloppy open letter to have been written by careful historians or exegetes of Scripture.

A final observation, and a most important one, has to do with the purpose for such statements. It used to be that a resolution sponsored by evangelical organizations concerned a biblical matter. The Bible was the source of authority, and clarification as to its meaning was the intention. The most recent example from this tradition would be the Nashville statement on gender and sexuality. Recently however, evangelicals seem to be using public proclamations on moral issues as a virtue signaling tool. Scripture does not play a very prominent role in these statements, and an exegetical clarification as to its meaning is not on the radar.

I have long maintained that a monumental “rebranding” is being forged inside many evangelical organizations. Christians are sick and tired of being the targets of media critique and the laughing stock of the world. The “new guard” views the earlier religious right’s political involvement as the problem and resents them for it. For a few years in the early 2000’s it was popular to embarrassingly disapprove of political involvement and instead “just preach the Gospel!” as if the two were diametrically opposed. Within the last few years this sentiment has changed to a left-leaning call to “engage culture!” It is a reemergence of the social gospel, except not as many hungry people get fed. It is enough to take a stand even if it’s in the form of a tweet. Cries to forward social justice, implement affirmative-action, support “racial reconciliation,” and strip the land of anything that could be considered offensive, especially symbols of the Old South, are new ways to supposedly communicate gospel-centeredness. The advertisement has gone out to the world that evangelicals are tolerant people who care about “injustice.” Perhaps if the world can see that we truly care they will be more open to joining us?” Then in walks Trump, and this year Roy Moore, threatening their plan.

As great as the desire was among evangelicalism’s elite, they could not seem to persuade the rank-and-file pew sitters to not vote for Donald Trump, who achieved 80% of evangelical support. Some of the reasons for opposition were understandable, Trump’s personal morality being the main one. However, much of the criticism at the time, and almost all the criticism since the election, has centered on shared concerns with liberals over identity politics.

Unlike the president, Roy Moore did not possess the same character issues that gave some evangelicals apprehension over Trump. Moore was the evangelical hero, and still should have been going into the 2017 Alabama senatorial election. He was the “Ten Commandments” judge in 2002 and defied the Obergefell decision 13 years later. However, between these two events his popularity with the “big wigs” waned, and it was not because he changed. Russell Moore, president of the Ethics and Liberty Commission for the SBC and no relation to Roy Moore, criticized both Roy Moore and county clerk Kim Davis for not keeping their “Romans 13 obligation to see law and order followed.” No careful examination of Romans 13 would give anyone the idea that lesser magistrates are required to uphold arbitrary decisions by higher magistrates even if they are unlawful and immoral. Of course, this should not come as a surprise given Russell Moore’s admission the previous year that while he would not attend a same-sex wedding he would go to the reception. You read that last sentence correctly.

Fast forward to 2017. Judge Moore survives the Alabama senatorial primary despite little help from prominent evangelicals, and surprisingly beats both Trump’s and the establishment’s pick. It was a done deal until the Washington Post ran a story on November 9th reporting the allegation that Leigh Corfman was molested by Moore in 1979 when she was only 14. Then the snowball started rolling downhill. Two more women accused Moore of molestation. Despite, being faithfully married for over thirty years and being in public life for longer without the slightest hint of inappropriate behavior, the charges stuck. Even after confirming accuser Beverly Nelson’s tampered-with yearbook and false description of the restaurant she and Moore supposedly met at, the charges stuck. Despite the unlikely opportunity Moore would have had to date Corfman during the 12 day window before she moved from her mother’s house, the charges stuck. Despite the fact that the “mall banning” story turned out to be a complete fabrication, the charges still stuck.

Christians normally expect to be condemned by the media, but from evangelical Christian leaders too? To his credit, Franklin Graham was the only one who seemed willing to publicly stick by Moore. Of course Russell Moore accused Christians who supported Roy Moore of worshiping power and seeing women and girls as expendable. Al Mohler insinuated to CNN’s Don Lemon that Moore’s less-than-serious response to the accusations made against him cast doubt on the judge’s innocence. Raymond Ortland, a council member at the Gospel Coalition accused Christians who supported Roy Moore as believing in a different salvation altogether. In the “Nonpartisan Solution to Our Roy Moore Problem,” Joe Carter, a senior editor at the Gospel Coalition called Christians who supported Moore “hypocrites.” I happen to know this sentiment is coming from the same Gospel Coalition that is putting on the MLK50 conference next year. As a result the SBC seminary I attend is even offering credits on the subject of Martin Luther King Jr. as a history course for those who would like to attend—this despite King not being a Southern Baptist or even possibly an orthodox Christian, and more relevantly a faithful husband. Martin Luther King Jr. was a confirmed serial adulterer. So Christians who support an orthodox Christian with dubious and unconfirmed accusations against him are hypocrites, while Christians who honor a possible false-convert with confirmed sexual improprieties are not? This observation is in no way meant to discount some of the good things MLK did, but to honor him while condemning Moore looks a lot more like hypocrisy.

What is more disturbing than any of this perhaps is the unwillingness on the part of many evangelical leaders to apply an actual Biblical standard to the situation. The “two or three witness” standard for authenticating truth. Deuteronomy 19:15 is one place in which this standard is mentioned:

A single witness shall not suffice against a person for any crime or for any wrong in connection with any offense that he has committed. Only on the evidence of two witnesses or of three witnesses shall a charge [singular] be established. ESV

It is interesting to note that the only person that seems to have more than one witness against them in the whole situation is Beverly Nelson, Moore’s most vocal accuser. Some evangelical elitists have not only thumbed their nose at due process, but they’ve ignored Scripture’s own standard in establishing authenticity.

Was their influence enough to sway the Alabama election? When the results are within two percentage points in a highly populated evangelical state, the answer is quite possibly, “Yes.” However, such victory comes at a price. Those who have watched Southern Baptists and Gospel Coalition leaders condemn Moore while not uttering a peep about pro-abortion Doug Jones are not likely to take them seriously, which is a very bad thing. Evangelical leaders think they are establishing their moral authority when in reality they are ripping it down by betraying their own principles. The world will never accept them, but the world will use them, whether they know they are being used or not. More importantly, it would seem they are unknowingly perhaps putting favor with the world over favor with God. If it comes to the point that they completely reject biblical authority on social issues and alienate their base their voices will be insignificant indeed, which is exactly what Satan wants. Let’s pray they wake up before they have nowhere left to turn.