Musings on the Modern State During Covid-19 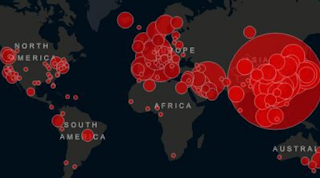 I’m noticing progressive evangelical friends of mine are coming down on the “common good” side of this whole Covid-19 debate. Essentially, whatever will save lies is necessary regardless of financial cost or threats to personal liberty.

Draconian measures must be taken by modern states NOW because we COULD possibly have extremely high death rates.

On first glance, this seems to make sense. After all, who wants to argue that death is a fine thing! Thus the knee-jerk lock-downs progressively being implemented in some areas.

However, there are a few basic assumptions one must accept in order for this argument to work.

1) First, one must accept the concept of the modern state. Communities aren’t organic entities capable of making responsible decisions for themselves, but instead, national governments with “god-like” control and abilities are preferable.

2) Second, one must assume it is always necessary to act as if a potential worst-case scenario will take place.

3) Third, one must presuppose that individual human volition in assessing risks and making decisions is irrelevant.

4) Fourth, one must believe that modern states will necessarily act in the best interest of the people that live within them by not pursuing harmful objectives simultaneously.

5) Fifth, (and this is the sticky one!) one must assume alleged “experts” are in a better position to make collective decisions than non-experts.

6) Sixth, one must assume an expanded role of government into making ecclesiastical and familial decisions in a non-wartime setting OR assume that the principles at work in a combat situation are also at work in the case of a pandemic.

I will very briefly touch on each of these.

The idea that it is preferable to have a modern state guaranteeing abstract benefits such as liberty, equality, etc. on a scale as large as many are today is an entirely new concept in the history of the world. It is assumed by just about every millennial and most baby-boomers for a variety of reasons among which are the ideas that egalitarian participation, secular notions of human rights, and hedging against the threat of other modern-states is important.

A) Modern states have the worst track records with human rights violations because of the scale on which they function. The egalitarian tendency creates a situation in which there are no intermediate hierarchies between the power of the state and lesser magistrates and voluntary associations. They also inevitably impose a kind of state atheism in their pursuit of pluralism. Because decisions are not made on a human scale, they tend to be impersonal.

B) Modern states are relatively new, and if we are the use the logic currently on display in how to handle a virus, they are relatively untested, which is a good reason to not rush to think them preferable.

The idea that a modern state must react against a worst-case scenario, could easily apply to all kinds of threat to human life. Because something is possible or, even probable, hasn’t customarily meant the state imposes itself on to local municipalities or individuals.

For example. During the winter, local authorities generally shut roads down AFTER the threat has presented itself by agreed upon local customs. Having lived in both the North and South I can certify that customs differ from place to place on whether or not weather conditions permit safe travel. Up to that point, individuals are free to travel at THEIR own risk. There COULD very likely be a 40-car pile up, and sometimes there is. But, this is assumed to be a calculated risk that drivers undertake when they CHOOSE to drive.

The modern state does not shut down roads simply because of the POSSIBILITY that snow may come, and they certainly don’t do it in North Carolina just because the storm is worse in New York. Even during hurricanes when evacuation orders are instated, the right of individuals to stay in the local area is generally not infringed.

South Korea’s way of handling Covid-19 generally took into account this principle. Unless someone tested positive, and thereby threatened others (parallel this with someone losing their license for unsafe driving), the state would not restrict their general movements.

If it becomes the modern state’s prerogative to police the best possible course of actions that will make for the least amount of deaths, it could theoretically not only regulate, but eliminate common “unsafe” activities, even things like outdoor and team sports. We’ve already seen how totalitarians demonize football. Imagine outlawing it for the common good. The same principles being applied to the Covid-19 response could easily be applied across the board.

In addition, let us suppose that an influential member of the hypothetical “Ban Football” bill happens to own major stock in the NBA or some other sport likely to benefit when sport’s fans increasingly look for another team to support.

This gets down to the problem of human depravity. All men are not angels, and though the function of government is good (punishing evil doers and promoting a righteous standard), the men who occupy the offices of the government are not special. They are men with the same weaknesses of all men.

We are watching global elites, and recently the Democrats in their attempted stimulus package, demonstrate a wide range of ulterior motives from implementing the Green New Deal to adopting more globalism. Unrelated, yet harmful, measures are supported as necessary elements of a response to a virus.

With every new plan that’s proposed a team of specialists stand behind it. Richard Weaver brilliantly de-mythologized the specialist in “Ideas Have Consequences” (1949). The weakness of the specialist lies in his or her narrowness and group-think with other self-proclaimed specialists. This does not mean specialists don’t know anything. But, as Ronald Reagan said about liberals, they can know a lot “that isn’t so.”

Think of how many scientists accept the philosophical underpinnings of Darwinism or the politically-driven “Global Warming” narrative.

The narrow lane government was traditionally afforded in Anglo-American society involved punishing crimes, regulating international commerce, and maintaining a military in wartime. During war, it has always been understood, throughout every culture, that the ultimate objective of winning may sometimes clash with personal property (though even in those situations, it has been understood in Anglo-American culture that property owners ought to be compensated, even if at a later time).

The literal physical destruction of lives and property and the survival of a civilization usually led to cooperation with other societal institutions. It is impossible to set the time and place of an attack, when in the defensive, in such a situation, and this is understood.

In the current debacle, individuals, families, churches, and businesses are being infringed upon, not because their actions are endangering others, but because it is unknown whether their actions could possibly endanger others.

The danger this poses is the precedent it sets moving forward if the national government were to accept military powers. If fighting a virus is the same as World War II, then where does that train stop?

If we agree that under normal circumstances the government may not lock-down the entire country, and we agree war-time is the only appropriate time to lock down certain areas for justifiable reasons related directly to war time logistics (setting up battle equipment to stage an attack or defense, etc.) or direct threats (i.e. blackouts etc.), then a pandemic does not fit the bill. However, if we classify the pandemic as a war, we’ve just opened Pandora’s box and given it to the modern state.

One might object that these musings fail to take into account the realities of modern life, which would actually mean we’re right back where we started. Are modern states preferable?

It should come as no shock to anyone thinking straight that the modern state does not have its own resources. Resources are produced by men and women across the country. Is it possible for those resources to be arranged in such a way (as they once were) to fight a pandemic on a more accountable and efficient local level which will also preserve liberty?

As we enter this brave new world these are some of the questions not being debated, because, for most of us, our minds have already been made up for us.