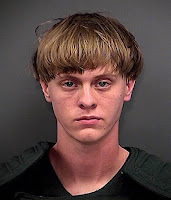 1) The Media Will Not Understand Christian Forgiveness.

This is perhaps the greatest opportunity for Christ’s love to shine. We are Salt and Light—the victims of the shooting who are now left without their loved ones are proving this. They can have forgiveness even for the most heinous act. May we learn from them. If you think about it, Roof altered his plans from shooting up a college. I wonder whether his original targets would have been as likely to be in the presence of God at this moment, with loved ones who could demonstrate Christ-like love. God’s fingerprints are on this.

2) Our Prayers Should Be for Dylan Roof’s Salvation. . . and Punishment.

Dylann Roof is a sinner just like you and I in need of the grace of Christ.

“Or do you not know that the unrighteous will not inherit the kingdom of God? . . . Such were some of you; but you were washed, but you were sanctified, but you were justified in the name of the Lord Jesus Christ and in the Spirit of our God.” 1 Cor 6:10a, 11

My prayer is God sees fit to treat Roof in the same way He treated another murderer—the Apostle Paul. Still God’s just standard is for murder punished as a capital crime (Gen 9:6, Rom 13:4). It is up to Civil Magistrates  (South Carolina) to administer such a punishment, which they will do.

3) Liberal Groups Will Seek to Improperly Use This Incident to Ban Guns and Flags.

Hillary Clinton has already weighed in, and liberal groups are coming out of the woodwork trying to discredit the what they describe as a culture of “hate” and “racism.” It’s much easier to blame inanimate objects like a flag when the real evil resides in the human heart. Our environment does not make us evil—it merely gives us the opportunity to practice the evil that was already in our hearts.

On the “Confederate Flag,” and “Apartheid” Regimes

I’ve read Roof’s manifesto and seen the photos of the places he visited proceeding his crime. There is no doubt that he was a racist and an individual influenced by drugs. Liberals (and some “conservatives”) are already trying to make this about the Southern Cross that flies on the State Capitol grounds to commemorate the Confederate dead who fought defending South Carolina. Here are the facts.

A) Roof’s views concerning the Confederacy, Rhodesia, and South Africa parallel the mainstream media’s incorrect views concerning those same entities. In other words, Roof bought into the idea that the Confederacy was all about slavery (even though their constitution banned the slave trade) and Rhodesia and South Africa were all about segregation (even though Rhodesia didn’t even have Apartheid, and the South African experience is a bit more complex than the simplistic Marxist interpretation- long story short, apartheid was not right, but it was the whites that ended up voting to end Apartheid under the flag that Roof displayed). I will leave you with these links of things for further understanding on the true nature of these nations.

The question should be asked- Why are Leftists so motivated to use this incident to get rid of a flag? Remember, this is a flag Clinton and Gore used in their 1992 campaign for president. This is the flag the Duke Boys drove all over Hazzard County. This is the flag Johnny Cash and Lynyrd Skynyrd stood behind at concerts. I could go on—but what brought the Southern Cross from being a non-offensive cultural icon that represented the South, to being the object of all the Left’s fury. Nothing significant took place in the last 30 years that would merit such a reaction? This question never gets asked. Here’s what took place in the last 30 years- a new generation steeped in public education took the cultural reigns. Disconnection with the past leaves one stranded without meaning in the present. A constant drum beat of Southern guilt only leads to a desire to find identity in something other than one’s culture. I believe many Southern millennials do not value those who have gone before them, to the point they are ashamed of them. Big government socialists want everyone to disconnect themselves from symbols representing family, region, and place—at least symbols associated with Western/Christian culture. All identity and all allegiance must therefore be given to the National state. I believe this is what’s taken place. This is just a theory, but there must be an answer to the question, what happened in the last 30-40 years?

By his own admission Roof was not prepared to go into the ghetto alone being only one solitary individual. So he opted for a church. I believe it is very possible Roof entered the one place he knew he wouldn’t receive return fire. The take-away is not to ban guns, especially since roof was already breaking the law in simply carrying a firearm. The take-away is for churches to encourage or arrange for congregants to carry firearms. Roof reloaded five times. If someone else had a firearm he may have not even had the opportunity to reload once. The Left has already been pushing for more gun control- but the truth is, more gun control would leave every law abiding citizen in the same place those at the church were- unarmed and vulnerable.

The story has shifted since I started writing this a few days ago to be one about removing the “Confederate” Flag from the SC state building grounds. I find myself righteously indignant over the fact that the families of the murdered, and the justice for the murderer, have taken a back seat to the “real” issue—getting that “racist” Confederate flag off the state lawn. What makes it even more strange is the fact that Russell Moore, President of the Southern Baptist Ethics & Religious Liberty Commission, in an op-ed for the Washington post, wrote one of the more sloppy and ignorant attacks on the flag, and the Gospel Coalition has also seen this as an issue somehow worth getting behind.  So prominent young evangelicals find themselves somehow aligned with Moveon.org? It sounds to me like many are understandably, albeit ignorantly, caring for their brothers and sisters who may be offended by such symbols. More likely, I believe there is a desperation to prove to the world that Christians aren’t racist. To think there are evangelicals trying to take advantage of this shooting as well as liberals saddens me. I don’t want to see the lives of people used as political footballs as everyone races to the microphone to be the “most tolerant.” The viral article Moore wrote dishonors the history of his own denomination and makes the statement, “The cross and the Confederate flag cannot co-exist without one setting the other on fire.” I contend if you allow one symbol to be trashed in favor of “tolerance,” you can expect the other one to as well. The cross and the “Confederate flag” MUST co-exist or else both will be set on fire.

Roof makes it clear in his manifesto that it was during the Trayvon Martin shooting that he woke up to the idea that he was being lied too. George Zimmerman was acting in self-defense, and look what happens! He gets all the blame! This inspired Roof to look up stats for black on white crime. This changed him as he became what he calls “racially aware.” My question is, what other entity is racially aware- i.e. views the world through a racial lens? It wasn’t Southerners. Roof makes it clear he had no racist tendencies, none of his friends were racist, his parents weren’t racist. It’s the media. Roof had an awakening of anger when he found out how many whites were being murdered, raped, etc. by blacks. That inspired him to do research, which sounds like landed him on some white supremacist websites. Here’s the chronological order.

1) Roof isn’t racist. 2) The media lies about Zimmerman. 3) Roof researches what other incidents the media lies about. 4) Roof sees the injustice present in the media concerning race relations 5) The medias list of villains become Roof’s list of heroes. Rhodesia, South Africa, Nazi Germany, and the Confederacy are on that list. 6) Roof takes “justice” into his own hands.

If you think about it, Dylan Roof made the same mistake the media makes but came to an opposite conclusion. During the Zimmerman trial whites were murdered and beaten up as a result of misguided black people who believed their reporting. They took justice into their own hands. Dylan Roof took justice in his own hands the opposite direction in reaction to the same lies! The media helped funnel him into the hands of white-supremacists. Everything the media called racist must be good because after all, the media can’t be trusted, in his mind. He wasn’t a Rhodesian or a Confederate by conviction. That much is very clear!  If you view the Confederates and the Nazis as having anything in common you’re on the WAY wrong track. Hitler looked to Lincoln for inspiration not Davis. But according to the Mainstream media both regimes were the same! Roof agreed. Roof was “racially-aware”.

6. The “Confederate Flag” Needs to Stay in South Carolina!

To remove the flag from the capitol grounds would be to play into the sames hands that Roof did. Really the flag has nothing to do with the shooting other than as serving as one of props used to demonstrate Roof’s ignorance. If the flag comes down the message is simply this- The honor of the men who died defending South Carolina against an aggressive invader is only worth as much as the value given to them by a drug-addicted, evil, and ignorant 21-year-old. The flag displayed on the state grounds is a Southern cross used in battle. It is not a national flag. Whether one agrees or disagrees with the policies of the confederate government is irrelevant. The flag on the state grounds is a flag honoring the men who served and paid the ultimate price. The purpose of this article is not to give a full defense of the Confederacy, but I can assure you a defense ought to given by someone when one of its symbols is under attack. Below I have offered some interesting links- some short and some long for those who are interested in studying this subject further.

Of course, sometimes the reenactors know more than the politicians, “historians,” and activists combined.

7) South Carolina Has Much to be Proud Of

Unlike Ferguson and Baltimore, Charleston has not experienced any of the riots one might expect. Instead, what exists is many different kinds of people coming together and mourning over nine precious lives.