Take Down Mississippi’s State Flag . . . Or Grandchildren May Go LGBTQUIA 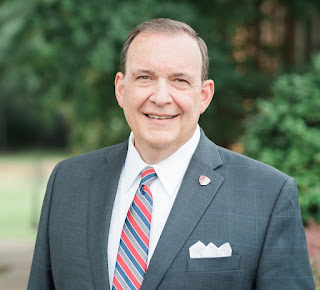 For years Ligon Duncan has been very influential in evangelical circle through his leadership positions at Reformed Theological Seminary, The Gospel Coalition, and The Presbyterian Church of America. He has spoken at major conservative evangelical conferences such as The Shepherd’s Conference and Ligonier. However, in the last few years, Duncan has taken what appears to be a left turn.

In 2018, At the T4G conference, Duncan publicly pitched an emotional indictment against “Baptists and Presbyterians” of the “19th century leading up to 1837.” Their sin? They allegedly “decided that slavery and slaveholding was dividing the church” so they told themselves that “‘If you talk about stuff like that in the church you’re getting into politics and social life.’ . . . and all the while they were saying [that loving your neighbor] doesn’t apply here.” Though it well documented that prominent Southern Presbyterians were actually concerned about a corruption of biblical teaching on the topic of slave/master relationships, not making love of neighbor a “political issue,” Duncan wept as he blamed the influence of his Presbyterian forebears for blinding him to racism and keeping him from caring about it.

The next year, Duncan asked, “How are we going to deal with a culture which is increasingly antagonistic to Bible Believing Christianity?” He stated that he had “started to see generational differences in how to deal with [social justice]” and was concerned that “racial issues” could potentially “drive my grandchildren into the arms of the LGBTQUIA issue.” AD Robles, a conservative Christian commentator observed that Duncan was trying to “get a little bit woke, so [his grandchildren] don’t go all the way woke.”

Later that year, Duncan wrote a forward for Eric Mason’s book “Woke Church,” calling Mason “A faithful gospel preacher who loves and believes the inspired, inerrant, infallible, authoritative Word of God, who is a transcendent voice in this larger discussion.” Mason’s book endorses Black Lives Matter, follows the general interpretation of American history laid down by the 1619 project, harps on what he considers systemic injustice by police, yet ignores the negative impact of the welfare state on the Black family.

Some politically conservative supporters of Ligon Duncan have been surprised by his eagerness to endorse social justice. A few have suggested that perhaps Reformed Theological Seminary and Duncan may have been compromised by accepting financial support from James Riady, an Indonesian billionaire affiliated with Bill Clinton and banned from the States for his involvement in the Clinton fundraising scandal. However, it’s entirely possible that like much of leadership in the evangelical world, Duncan has either changed his mind or gone along with the social justice agenda out of conviction or for pragmatic ends.

Duncan, a seasoned preacher, is very good at pulling heart strings and emotionally connecting. His latest deployment of these skills on behalf of the social justice movement came earlier this week when he called for Mississippi to change their state flag by removing its Confederate imagery.

Duncan starts off by touting his Southern credentials before ripping into the Confederacy for symbolizing the perpetuation of chattel slavery and denial of black people’s “social and political equality.” What follows are a series of associations meant to tarnish the state flag. Mississippi’s secession declaration (Duncan incorrectly refers to the “Ordinance of Secession” for some reason), which predates both the war and the Confederate Battle Flag, somehow proves the war was over slavery. Yet, Duncan fails to make the proper distinctions a historian should be careful to make.

Mississippi, like South Carolina, Georgia, and Texas, mainly focused on the sectional conflict over the “expansion” of slavery. As Mississippi native Jefferson Davis wrote, “It was a question of distribution, or dispersion, of the slaves, rather than the ‘extension of slavery’” itself. Prominent Presbyterian James Henley Thornwell summed up the major debate over slavery this way: “To exclude slaveholding is . . . to exclude the south.” In other words, the lower South did not secede to promote slavery as a morally virtuous and perpetual institution. The Confederate Constitution itself forbade the importation of slaves. Rather, they believed the North had violated the Constitution and undermined popular sovereignty by purposely keeping influential Southerners from moving to Western states with their slaves. This did not change the number of slaves, but rather where they lived. The early Republican party was determined to keep slavery in the South, which is part of the reason they never proposed plans for integration into the North or the West.

At the time of the war, the Revised Code of Indiana stated, “any white person encouraging Negroes to enter the state was subjected to a $500 dollar fine.” Two years before the war Abraham Lincoln said, “the next best thing” to ridding the country of black people was “to keep them apart where they are not already together. If white and black people never get together in Kansas, they will never mix blood in Kansas…” The same year, Illinois Republican Lyman Trumbull said, “I want to have nothing to do with the free negro or the slave negro….We wish to settle the Territories with free white men.” The slogan for Republican Edward Bates 1860 campaign was, “Missouri for white men and white men for Missouri.”

Northern Republicans, whose region had been foremost in profiting from the slave trade, wanted to keep over half the free blacks who resided in the South, as well as the slave populations, from moving North or West. Simultaneously, however, they exerted pressure on Southerners to immediately free slaves without compensation, an attitude which Mississippi stated left them with “no room to hope for cessation or for pause.” This desire to keep black people contained in the South extended beyond the war and helped result in hundreds of thousands of former slaves starving in an impoverished war-torn region. Mississippians could see that Northern rhetoric seemingly intended to “elevate or to support the slave,” actually destroyed “his present condition without providing a better.” The North, they stated, advocated the social and political equality of blacks and promoted slave insurrections “in our midst,” yet NOT in Northern States, where they refused to provide such equality.

Of course, the political and cultural debate between North and South had raged for decades before the war over deeper issues. Thornwell described the conflict between the regions as a battle between “Christianity and Atheism” as early as 1851. While Northerners were adopting higher critical readings of scripture, he successfully battled these views throughout the 1830s-50s at South Carolina College. The issue of higher criticism alone caused Southern schools to implement an extremely popular Christian apologetics program which incorporated “Evidences of Christianity.” The Confederate Congress endorsed Henry Timrod’s characterization that the North had a “religion” but not a “Christian faith.”

Meanwhile, in Congress, Senators Calhoun, Webster, and Clay all battled over primarily economic sectional issues like the War of 1812, the National Bank, tariffs, and eventually the expansion of slavery, while still attempting to maintain the Union. The Northeast threatened to secede over the inclusion of Texas. South Carolina threatened to secede over the Force Bill, which they nullified. Tension between agrarian and commercial interests contributed to the vilification of the South by the Northern presses, pulpits, and schools until Mississippians truly believed the “whole popular mind of the North [was] excited and inflamed with prejudice.”

Of course, there never would have been a war, Confederate Battle Flag, or 1894 Mississippi State Flag had Federal troops not invaded the State, which ultimately was the cause of the war, and an important motivation for the secession of many upper South states as well. The current question regarding the Mississippi state flag actually has little to do with their secession declaration, and much more to do with the sacrifice of men who defended their State and homes from Sherman’s Army. In fact, Governor Stone’s daughter described his motivation in incorporating the 1894 design as due to his love for the “memory of valor and courage of those brave men who wore the grey . . .” He mentioned nothing about slavery, oppression, terror, the inferiority of black people, lynching, or voting rights—all of which Ligon Duncan attaches to the flag while ignoring authorial intent.

Duncan seeks to use the current news cycle, focused on “systemic racism,” to turn Mississippians away from Governor Stone’s intent, and the original purpose of the design, to instead solely focus on racial problems from the State’s past. If Mississippians want to take down their flag, that is their prerogative and perhaps there are reasons they might want to do so. But they ought to be honest about why the design was adopted in the first place. They also should not allow their legislature to jam through a measure during the current irrational and emotional news cycle. As Ligon Duncan expressed last year, he’s worried his own grandchildren could be driven “into the arms of the LGBTQUIA” lobby. Yet, this is exactly how to accomplish that very thing. The mob does not slow down. And, appeasing them with flags is more than a little like the children’s book Duncan perhaps read to his grandchildren, “If you give a moose a muffin.”

Perhaps, if for no other reason, the flag should stay in place currently as a barrier to a mob whose intent is to rip down just about everything from America’s past based upon similar cherry-picked readings. None of us approve of the American slave system, ethnic partiality, or any measures used to oppress undeserving people. But, another form of “civil” slavery called “socialism” is upon us and we don’t want to help that revolution commence further by giving in to the demands of that system.

Duncan has opened himself up to his own cancellation when someone just as emotional comes along and perverts “loving neighbor” to mean taking down the symbols of oppression against “LGBTQUIA” people. There used to be a phrase Americans were fond of at one time: “We do not negotiate with terrorists.” Perhaps it’s time to adjudicate political disputes without doing so in the pressure cooker of immediately catering to the whims of a competing social justice religion whose ultimate goal is to end Christianity . . . for the sake of our grandchildren.