The gospel of “justice,” a new way to preach “circumcision?” 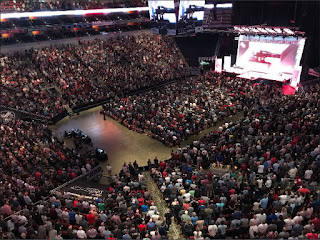 Over the past 2 weeks many at The Gospel Coalition’s MLK50 conference, and the Together 4 the Gospel Conference have been postulating the need for “racial reconciliation” in the church and “social justice,” and calling them “gospel issues”. Many of these statements have come from men whom I’ve reaped great benefit and encouragement from listening to. I still respect and certainly still love them in Christ, but I’ve become greatly concerned. What’s been troubling is their subversion of the Word to make the gospel say something more than it actually does thereby making their goals a Christian requirement.

Let me be clear; I detest racial prejudice, and seek to have it rectified when I see it. When I do hear about churches causing division on account of the color of someone’s sin I get sad and angry, for that is entirely against what scripture teaches. The Lord makes this very clear to Peter in Acts 10:34-35 “So Peter opened his mouth and said, “Truly I understand that God shows no partiality, but in every nation anyone who fears him and does what is right is acceptable to him.” If we show partiality by either giving someone more esteem or less esteem and care based on their ethnicity, we’re in sin. Another helpful example is in 1 Samuel 16:7 where the Lord says to Samuel when he’s going to anoint the new king of Israel: “Do not look on his appearance or on the height of his stature, because I have rejected him. For the LORD sees not as man sees: man looks on the outward appearance, but the LORD looks on the heart.” These verses fly in the face of certain preachers who say that white people need to repent of their racist sins. Such a sweeping judgement of millions of people based on the color of their skin is clearly unbiblical. What they would be correct and justified in doing is to call out specific instances of racism in the church. These do exist on both sides of the color spectrum in the church; real hurts have been given and received that should be dealt with. However, the perpetrators of the sin are the ones who need to repent and seek forgiveness, merely sharing a sin color does not mean that the guilt is also shared. “Do not judge by appearances, but judge with right judgment.”- (John 7:24)

So how exactly has the Bible been used incorrectly? In order to substantiate his claim that “My white neighbors and Christian brethren can start by at least saying their parents and grandparents and this country are complicit in murdering a man who only preached love and justice,” Thabiti Anyabwile, writing for The Gospel Coalition, justifies his remark by citing Titus 1 where Paul is talks about the Cretans.

One of the Cretans, a prophet of their own, said, “Cretans are always liars, evil beasts, lazy gluttons.” This testimony is true. Therefore rebuke them sharply, that they may be sound in the faith, not devoting themselves to Jewish myths and the commands of people who turn away from the truth. (Titus 1:12-14).

The error he commits is missing that Paul is describing a cultural problem, not an ethnic/racial one. He was instructing Titus on how to establish solid leadership over them so that they would not be led astray by false doctrine. Their tendency of believing in fantastic things and myths is not necessarily an inborn and innate trait of being born a Crete. Nowhere in the New Testament do we see the apostles urging the brethren to apologize for sins their tribe had committed to another one. There would be no end to the confessing. The Lord recognizes that we humans have a sinful tendency to hold onto to hurts, and to make sinfully prejudiced categorizations of other people groups. The apostles counteract that tendency. Paul does so very clearly in Colossians 3:10-11.

Do not lie to each other, since you have taken off your old self with its practices and have put on the new self, which is being renewed in knowledge in the image of its Creator. Here there is no Gentile or Jew, circumcised or uncircumcised, barbarian, Scythian, slave or free, but Christ is all, and is in all.

The NT does not deny the existence of ethnic diversity, but it certainly speaks to how we often treat it incorrectly, so Paul in a sense is saying “You know all those problems you guys have with each other because of your differences? Forget about them. You’re new creations in Christ, and are of one body in Him. Your citizenship and identity in Him greatly exceed any identification you previously held to.” The clarity of Paul’s words makes it shocking that men who can so skillfully exigete God’s Word mess up in an area that seems so cut and dry.

One article I found particularly disturbing was a confession piece by Paul Tripp in which he lamented how he’d been preaching an imbalanced gospel all these years. Preaching the gospel of grace, but not the gospel of justice. “By God’s grace, I have become deeply persuaded that we cannot celebrate the gospel of God’s grace without being a committed ambassador of the gospel of his justice as well.” Now here’s the thing, the author gets so much right in this article:

Of course, God would have never have participated in such a negotiation, because he is a perfectly holy God! And if he had, there would have been no need for the penalty-bearing, forgiveness-granting, and acceptance-resulting sacrifice of Jesus on the cross.

Think with me for a moment. Grace is never permissive. Grace never calls wrong right. If wrong were not wrong, there would be no need for grace. Forgiveness always assumes some offense against moral law.

That means we cannot celebrate and proclaim the message of God’s grace while we do what God would never do—close our eyes to the injustice around us. We cannot be comfortable with exegeting his mercy for all people without being an advocate for his justice for all people.

These are all true, and there are other grand truths of God the author puts very eloquently in that article. Of course the Christian ought to be for justice, because God is just, and we’re made in His image! Regrettably, here we find some very big inconsistencies that are concerning. The author talks about being committed to God’s “gospel of justice.” This makes no sense biblically speaking. ‘Gospel’ means ‘Good news’ God’s justice is punishment for our sins. We stand condemned before Him, and our sins earn us an eternity in Hell. God’s justice is the bad news part of the gospel! The good news is that if we’re in Christ, we’re spared that, and get to spend an eternity with Him because of His grace! Being a “committed ambassador of the gospel of his justice” is a bizarre thing to say. “Good news everyone! You’re all going to Hell!” I don’t think that’s what he intends, but biblically speaking, that is what that would mean. So lets overlook that poor phrasing of what I believe the author is really getting at which he states in the article with this “The cross forbids me to close my eyes to any form of injustice, whether personal, corporate, governmental, ecclesiastical, or systemic.” He never describes what being an ambassador of justice looks like. He talks about how he and his wife grew closer and had their eyes opened to some racist struggles black people in his church faced, yet he never mentions how he brought justice into it.

Another problem is where he says:

Again no specific examples are given, and he uses a lot of generalizations. Now, I surely recognize that there are some churches, on both sides of the melanin spectrum which have people who struggle or give–in to racism in word or perhaps deed. These churches need a gospel-reformation. But he says things like “our churches” and “But to whose leadership we wouldn’t serve under.” Are there people like this? Yes, and maybe the author really was like this, but it’s fallacious of him to lump me in with his sin just because we look alike. For a lot of these allegations, he may speak for himself. I wonder if he’s even committed what he’s claiming to repent of, and if he just hasn’t been guilt–tripped into it. Justice after salvation is upholding God’s judgement without regard for someone’s background. What I see here is “because their background is this, then we must do X.” Don’t get me wrong, it is right to come alongside our brothers and sisters who have suffered! (Mourn with those who mourn) And we should do so regardless of their skin color. God does not show favoritism, and neither should we.

I truly believe that the gospel unites, and that when one part of the body suffers, the whole body suffers with it. The big issue here is that these preachers have been trying to make this racial reconciliation and social justice a part of the gospel, when they aren’t. The gospel naturally accomplishes this thing, it is it’s fruits. I look at my church as an example of this. It’s pretty diverse, and we don’t preach racial reconciliation or social justice, we preach the gospel. God reconciling man to himself through Jesus. All men are sinners, God shows no partiality in whom he saves. We all love talking about how great God is, His gospel, and living according to His Word so that as 1 Peter 1:15-16 says, “As obedient children, do not be conformed to the passions of your former ignorance, but as he who called you is holy, you also be holy in all your conduct, since it is written, “You shall be holy, for I am holy.” No, we’re not perfect, but there’s definitely a oneness in Christ that was accomplished through the gospel, not diversity for its own sake. I pray that these leaders would return to that basic and wonderful truth that the apostles preached, and would turn from what really seems like a new way of preaching circumcision.