What to Learn From Trump’s “Flip Flops” 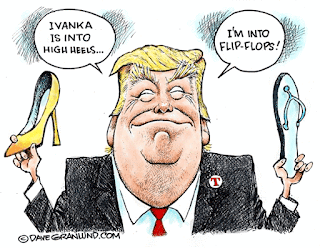 Today is the day. The day conservatives had known was coming. The day that never seemed to quite come for Barack Obama- but Donald Trump is not Barack Obama. Trump’s populist base thought they were marrying Rachel, but as they wake up from their drowsy inauguration festivities they realize too late that behind the vale is Leah, and she looks an awful lot like George W. Bush.

To some, Trump was the anti-establishment, to others the “common sense conservative,” and to millions the “America-first president.” However, today is the day he is really beginning to be “the disappointment” to those who believed in him most. Steve Bannon looses influence within the president’s inner circle, Trump decides China really isn’t cheating all that much on trade, and NATO is all of a sudden a force for good. . . this just after launching 59 Tomahawk missiles into Syria without congressional approval. The libertarians, alt-right crusaders, constitutionalists, and conservatives who weren’t already upset at the way Trump allied himself with the establishment during the healthcare debacle (which continued to fund Planned Parenthood- let’s just add the Christians in there as well), certainly have their reasons now. Even die hard supporters such as Ann Coulter are loosing faith. I guess that’s what happens when you substitute “Trump” for “God” in our country’s motto.

Here’s the take away: During the primary many hard-working middle class voters put their faith in the one guy they thought they could trust simply because he had never had the misfortune of being elected. We were all tired of being lied to by career politicians, so some of us ran as far away as we could from anything that smacked of Washington. Trump didn’t smack of Washington. Instead, he smacked Washington, and we grabbed the popcorn. But it doesn’t make someone your friend just because they dislike someone you dislike. Moses’ appointed “men who fear God, trustworthy men who hate dishonest gain” (Ex. 18:21). They were “wise and experienced men.” (Deuteronomy 1:15). Unfortunately, the first person some hopeful voters ran to prided himself on being the exact opposite. Ignorance and inexperience were wisdom. Personal arrogance and cheating to gain wealth were seen as positives. Trump’s history was not hidden. His political flip-flops and marital life were a matter of public information. But that didn’t seem to matter. As the Apostle Paul queries in 1 Tim. 3:5, “but if a man does not know how to manage his own household, how will he take care of the church of God?” . . . much less a whole entire country! Anyone who’s been watching Trump over the long haul isn’t surprised to see him break campaign promises and move the GOP into positions previously held by moderate democrats. The purpose here though isn’t to bash Trump primary voters. The point is- Let’s learn from this. Principles must have a greater priority in our minds than personalities. Using the democrats as our standard of decency will erase any moral difference that ever existed between the two parties. Make our principles great again, and THEN, and ONLY then can we hope that God will make America great again.