Where does bland food come from? “Thanksgiving with White Families” and Suburban Culture 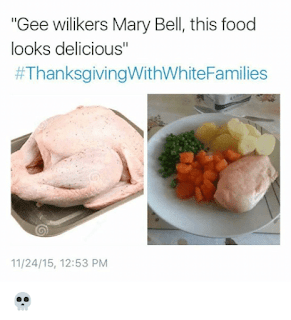 space prevent describing and examining the history of dishes like shepherd’s pie (Ireland) and haggis (Scotland), both bursting with flavor (if done right), both indicative of a culinary tradition rooted in necessity that is still being enjoyed and rediscovered today in those nations. In examining English cuisine it should be noted that while the nation may deserve some “bland” labels, especially in the last 30-40 years, this blandness was not due to the “Britishness” of the cuisine but rather the movement to a suburban culture. The English reputation for bland food is a modern phenomenon – there was a time when the “full English breakfast” was famous for its tastiness.

Another example indigenous to the United States is Southern style barbecue, as it is one of the most important food cultures in the world. It’s one of those highly specific culinary styles that involve a chef’s dedication all throughout the cooking process, frequently checking the slow roasted meat over hours of time. True Southern style barbecue cannot be done quickly or without commitment – it is often mimicked and copied with varying results, but as any Southerner will tell you, “nothing beats the real thing.” As food cultures go, it’s hard to think of anything quite as authentic while still encompassing a wide variety (because barbecue is very regional, differing state to state, county to county, town to town and even house to house). This traditional developed primarily among poor, white farmers and is the complete antithesis of all things “bland.”
One could spend countless hours delving into the nuanced cuisines of the plethora of cultures stereotyped as “white.” From Reykjavik to Dusseldorf, Pretoria to Melbourne, culture is and remains much more than just the color of one’s skin. The variety is just as pronounced within the United States, from Tampa to Tulsa and Pierre to Portland. In the same way, one will find that when hopping from one suburban sprawl to another – be it in Liverpool, Chicago, Cape Town or Sydney, we will encounter at least hints of bland, tasteless or at least inauthentic cuisine. And so “Thanksgiving with white people” will once again occur this year – it may be delicious or it may be dull – it depends on where you are, how you live and what you value, not on the color of your skin.
https://www.buzzfeed.com/pablovaldivia/15-things-youll-understand-if-youve-ever-eaten-at-a-white?utm_term=.lnzOvgbxr#.dyZPK5xZO
[ii] https://thegrapevine.theroot.com/dear-white-people-here-s-a-list-of-things-we-d-wish-yo-1790887918
[iii] https://www.good.is/articles/food-for-thinkers-the-rise-of-white-people-food
[iv] http://www.travelchannel.com/shows/bizarre-foods/episodes/mongolia
Tags:#thanksgivingwithwhitefamiliesbland fooddavid harrisidentity politicsThanksgiving foodwhite people food