Why Faith Statements Won’t Save Us

Within the past month, two prominent Southern Baptists were exposed for promoting ideas consistent with “Critical Race Theory,” a philosophy used to justify “identity politics.”

Matthew Hall wrote, “If you asked the question, how do I know if I’m a racist, if you live in [the United States or North America] and if you’re human, you have been affected by racism.” Hall’s solution was to “take a humble posture, recognizing that you have a racialized worldview of which you are likely unaware. Your beliefs, attitudes, and values have been formed in ways deeply informed by whiteness.”

Hall, who was elected in April as the provost of The Southern Baptist Theological Seminary, where Al Mohler presides, also stated in a video interview: “I am a racist,” adding, “I’m going to struggle with racism and white supremacy until the day I die and get my glorified body.”

Similarly, a video interview of Walter Strickland, who teaches at Southeastern Baptist Theological Seminary, was discovered to contain glowing endorsements of multiple heretical books by liberation theologians James Cone and J Deotis Roberts. Earlier this year, Strickland had served on the Southern Baptist Convention’s Resolutions Committee, which produced Resolution 9 on Critical Race Theory and Intersectionality. He told the New York Times in February that “Cone’s ideas are in play” in his classroom.

Both the article and video interview of Hall were hosted on Boyce College’s website during Hall’s tenure as dean, and both were scrubbed last month after gaining national attention.

When asked why the material was all of a sudden missing, Al Mohler responded, “Because I asked for it to be scrubbed. It was because I did not think it was helpful,” following up with, “If I thought Matt Hall was a danger to the church of Jesus Christ, he would not be the provost of Southern Baptist Seminary.”

The video of Strickland promoting liberation theology was not scrubbed. However, it was also hosted by the Jude 3 Project, which is not directly connected with the SBC or Southeastern. Most of the favorable language concerning Critical Race Theory from professors Walter Strickland, William Branch, and Matt Mullins on Southeastern’s “Kingdom Diversity” website, was scrubbed.

No Admissions or Apologies

Interestingly, instead of publicly apologizing for, firing, or articulating thoughtful disagreements with Hall and Strickland, both Al Mohler and the president of Southeastern, Daniel Akin, have affirmed their confidence in both professors based on their stated commitment to correct doctrine.

Mohler stated, “Thankfully, we are a confessional convention and we stand together on the Baptist Faith & Message (2000) and we can discuss any challenge with trust, respect, and eager cooperation.” Akin likewise affirmed, “the men who lead our national SBC entities. . . are all unapologetically committed to the BF&M 2000.”

Last week, Walter Strickland echoed Southeastern’s public showcasing of him and another professor signing “confessional documents,” emphasizing that he agreed “to teach ‘in accordance with and not contrary to'” them. 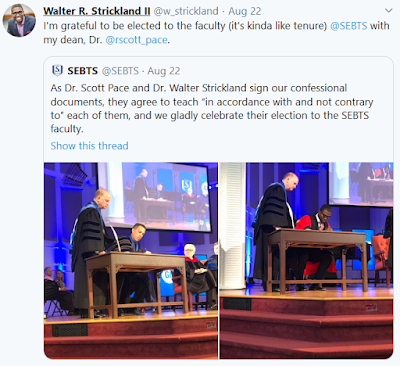 Similarly, this week, Matthew Hall advertised his signing of the “Abstract of Principles” during the “morning’s opening convocation ceremony.” 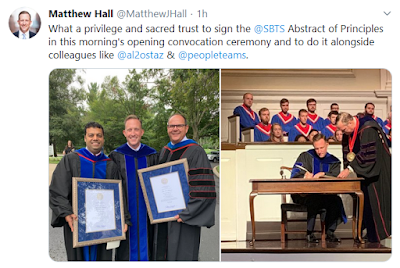 In an August 5th article entitled, “The Evangelical Reconcilers: How Evangelicalism Reconciles Itself With Modern Liberalism,” Stephen Wolfe divides the current evangelical situation into three categories: Warriors, Capitulators, and Reconcilers. Wolfe claims that, “Warriors are those willing to directly and openly oppose the ruling class. . . Capitulators are those who abandon [orthodoxy], largely conform to the norms of the ruling class, and assume a negative posture towards the [warriors],” while “[Reconcilers try to] make evangelicalism not necessarily acceptable or even respectable, but safe for toleration.”

Wolfe explains that reconcilers affirm “evangelicalism’s distinctive features (e.g., sexual norms), the sufficiency and inerrancy of Scripture, the classical Protestant view of the atonement, etc.” What makes the reconciler’s position unique is that they are “legitimacy in evangelicalism,” yet “they can do the work that liberal ideology has for them: making conservative evangelicalism harmless to the regime. They do this by actively undermining evangelicalism’s ability, both theologically and practically, to directly, deliberately, and assertively shape civil society and government.”

Wolfe identifies Daniel Akin as a reconciler, and perhaps this is a fitting title for most current SBC leaders. While pointing to a faith statement, many evangelical leaders, in an effort that accommodates popular worldly thinking, are giving safe havens to ideas that will directly undermine the very same faith statement.

History IS Repeating Itself

In 1923, during the “Modernist Controversy,” when German Higher Criticism and Darwinism threatened to undermine Christianity’s core doctrines, J Gresham Machan complained about “liberal theologians” “trying to obtain the religious advantages of an affirmation of sinlessness in Jesus [while] at the same time” also obtaining the “supposed scientific advantages of its denial.”

In a chilling quote, Machen talked about a time almost a hundred years ago when, “immediately after declaring that the Westminster Confession contains the system of doctrine taught in infallible Scriptures, many ministers of the Presbyterian Church will proceed to decry that same Confession and that doctrine of the infallibility of Scripture to which they have just solemnly subscribed!”

Machen concluded that “despite the liberal use of traditional phraseology modern liberalism not only is a different religion from Christianity but belongs in a totally different class of religions.”

The same can be said about the current “Postmodern Controversy.” If modernists, who emphasized objective truth in science, were capable of signing faith statements by redefining terms, how much more are postmodernists, who believe perspectives formed by social contexts determine truth?

This is why, while faith statements are necessary, they are not sufficient alone in protecting Christian institutions from postmodern heresies like Critical Theory. While they are supposed to function as shields against false teaching, they can also serve as shields against legitimate criticism. We need leaders who are not only able to “exhort in sound doctrine,” but also, “refute those who contradict,” as Titus 1:9 states. Unfortunately, it does not appear that Al Mohler and Daniel Akin are fully accomplishing the latter task, even in their own backyard.