A Review of Michael Card’s “The Walk.” 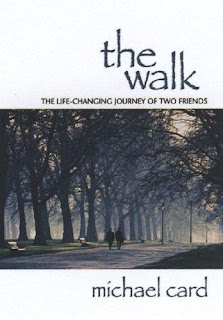 Over the past semester I have read a number of books on Christian discipleship—being a disciple, making disciples, shaping church ministry toward the goal of discipleship, etc. I would not say any of these popular Christian works have been unhelpful, but I think I should say that none of them has come close to impacting my life as much as Michael Card’s “The Walk.” It could be that my familiarity with and favor toward the author’s musical contributions made my ears wider as I listened to the author’s words—but I think there was much more to it. While many helpful Christian books focus on spiritual disciplines and strategies connected with forming successful discipleship stories, Card’s book is a discipleship story, and it’s reach went beyond my intellect. Doctrine and strategy are important and useful, but it is interesting that Jesus’ own teaching on discipleship was contained within a story. It is in the narrative of the gospels that Christians mine for the golden nuggets of doctrine and strategy. I think it is because Michael Card’s short book, like the gospels, contains teaching alongside of and within a story that it captured my attention on a deeper level. As the subtitle suggests, “The Walk” is “The Life-Changing Journey of Two Friends.” Through ups and downs, faults and foibles, joys and jubilations, triumphs and tragedies, braveries and fears, two friends help each other “unwrap Jesus.” As Card’s mentor, Bill Lane expressed, “When God gives a gift he wraps it in a person.” Bill Lane was God’s gift to Michael Card, but he is also now God’s gift to me through Card’s experience. In a small way I have been able to know Bill Lane through the eyes of Michael Card. The knowledge I have of him—his idiosyncrasies, personality, style, reactions to situations, have all become the canvas upon which the truths of Christian discipleship are painted. I am thankful that Michael Card took the time to record his experience with exemplified Christian discipleship and shared it with me.

The format of “The Walk,” is built around “three phases in Jesus’ pattern of discipleship.” The call to be with Jesus, the commissioning of the disciples, and returning to Jesus describes the three basic divisions of the book. Card describes how this pattern, learned from Bill Lane, is applied  in his own life:

I wake in the morning, and I’m with Jesus. I learn from Him. I read His Word. I spend time with Him. I realize my commission, and then I go out. I do His work and I speak His word. Then, at the end of the day, I come back and report to Jesus everything I’ve done and everything I’ve said. Now I hear Him say, “Come with Me to a quiet place and get some rest.” (125-126)

Card adds, “You can apply the cycle over a day, over a matter of months, or over a lifetime. That was my experience with Bill.” And it is this experience with Bill that the author primarily focuses on; dipping in and out of their walk together in order to concentrate the mind of the reader on a deeper spiritual significance.

One of the best illustrations of this is located in two chapters on what Bill Lane referred to as “the wilderness.” When Michael would “come to Bill with some problem . . . he would look at me as if he understood that more was going on than the often petty, superficial circumstances.” Card takes us back to a young version of himself navigating the dating scene, experience heartbreak along the way. Though such experiences are thought to be commonplace, and therefore “small” perhaps, they are not always small to the person going through them. Bill Lane understood this. I could almost sense him feeling the pain and wishing he could take it upon himself were it not for the benefits such an experience was bringing to the life of Michael. The wilderness is where Sonship is established. In other words, God becomes a true Father to those who are forced to rely on him. Israel learned this while wandering the desert for 40 years. Jesus experienced the same dependency during His 40 days of temptation. Becoming a more true son or daughter of God is a deeper spiritual reality oftentimes hidden by pain.

The formation of Michael Card and Bill Lane’s discipleship relationship itself carried with it the reality of something deeper, something better, something spiritual. Timing is not left up to chance. Before the two met, Lane had recently departed from a Christian seminary under personally difficult circumstances. He also moved from a place where he had experienced close relationships with Christian students into a secular university setting. Longing for someone he could invest himself in and “unwrap Jesus” with, Bill told his wife about a fleece he had laid out. He would pray that God would send him a student he could mentor. He further prayed that whomever this student was would take the initiative by asking him for a block of time. Card did just that in 1975, kicking off a deep relationship that would last 24 years. The two would take daily walks together, even when classes were cancelled due to snow. They shared the intimate details of their lives. In Michael’s words, one of Lane’s goals was to, “wake us up to what is really going on around us, to encourage us to take our eyes off ourselves and see that our world is not the only world.” There was something far more important going on when a young student entered the office of his professor with an academic question. There was a divine encounter for a greater purpose.

The illustration of this concept alone was well worth the read for me. Living in what seems often like a mechanistic world, it is good to be reminded that there is something outside the box. The most relatable chapter for me in the whole book focused on this point. In, “Let the excellence of your work be your protest,” Card describes his frustrations with being a musician in the Christian music industry. He writes: “A bitterness in my heart and soul, caused by focusing on what I believed were the ‘evils’ of the Christian music industry, had almost incapacitated me.” This is a statement I immediately connected with. It seems like almost anywhere I go nowadays I can be in danger of carrying a similar sentiment. Not only do I share Card’s frustration with the Christian music industry, but I see similar problems in “Christian” education, denominational politics, national politics, the direction of culture, etc. I’ve joked with my wife on more than a one occasion that I hope they don’t ruin barbecue too (my favorite food)! Sometimes it feels like I’m scraping the bottom for something that is not going in the wrong direction, something that is still good and has not been tampered with. And while I do believe righteous indignation and discerning critique are necessary, there should be no room for bitterness. Thus Bill Lane’s advise to Michael Card, as he experienced emotions similar to my own, may be the most memorable piece of advise from the book. “If you are going to protest the state of the industry, do so by making your work the best it can be.” Card describes his impression of Lane’s statement:

Yet this is, of course, a naive notion—to combat shallowness and shoddiness with excellence in a world that rewards the former with fame. But this is the kind of child-like naivete that made Bill a man of God. He believe that this world is not all there is, that there is One who will reward us based on a radically different value system. (96-97)

One of my first thoughts after reading this statement was, “This is such an obvious Christian truth, yet I am always forgetting it.” I know I’ve recently been struggling about the idea of publishing material that is out of step with mainstream academia. While I am confident that I am forwarding the truth, the consequences of doing so frighten me. Will I be blacklisted by any organization? Will doors that are open now to me be shut? Will I decrease my chances of having a greater impact in the future? These, and questions like them seem to melt away when I consider the fact that I am not primarily publishing information for people, but rather for God. My reward will not be book sales or positive reviews. It will be hearing “Well done good and faithful servant” on judgement day. Bill Lane understood this, and seemed to consistently live his life with eternity in mind. I can channel my frustration into bitterly complaining or I can make a finer product for my Master.

One chapter of the book that I really appreciated was entitled, “Called to Conflict.” I suspect to many Christians such a title would seem puzzling. Praying together, crying together, studying God’s Word together, making good decisions together, experiencing rest and stress together, learning to truly listen to the voice of God together, and sacrificing for one another are all aspects of a discipleship relationship. They seem acceptable. But conflict? Card asks his readers this question, “Who rejected Jesus?” The answer? “His own family, biblical scholars, [and] those from His own hometown.” Being a disciple of Jesus will mean making enemies. It will mean being misunderstood. But it will also mean being with an all-loving and all-powerful friend forever. Michael Card does not sugar coat the high cost of being a disciple. It requires work and sacrifice, but the rewards are unimaginable. Entering into a human discipleship relationship may include “loving confrontation on one end, ready forgiveness on the other, and vast amounts of patience in between.” But it’s all worth it.

“The Walk” ends like a tear-jerker. Bill Lane is diagnosed with cancer, and eventually passes from this life to the next; but before this happens he gives Michael Card what Card described as the “greatest compliment of [his] life.” He moves across the country to be with Michael to show him how a Christian man faces death. As the book draws to a conclusion Card reflects on the reality of eternity and the way in which he himself changed as a person through knowing Bill Lane during this difficult time. He remarks that he became “more tender-hearted,” and that “tears seem to stay closer to the surface.” Perhaps this is not only part of becoming more like Jesus, but also becoming more human. It is certainly an area I want the Lord to change me in. To take my often times rough and calloused heart, and make it tender before Him. One goal I have now that I have finished this book is to be an older Christian’s Michael Card and a younger Christian’s Bill Lane. May God grant this request to every Christian!