The Enemies Within the Church project, as well as other efforts to expose and refute the social justice movement within American Christendom, are having an effect. Last Friday evening, Enemies Within the Church revealed a compilation highlighting various quotations from three Southern Seminary Professors endorsing aspects of Critical Race Theory between 2014 and 2018. Included were statements by Provost Matthew Hall, as well as Curtis Woods and Jarvis Williams.

The video opens with a statement by president of Southern Seminary, Albert Mohler, in which he claimed in August that “No one is going to be teaching at Southern Seminary from the ‘other side'” “of postmodern, critical theory.” The compilation proceeds to show Matthew Hall in a 2016 interview, where he appears along with Dr. Otis Moss III, who took over for Jeremiah Wright, Barack Obama’s famous pastor, at Trinity Church of Christ in Chicago. Hall shares that he was not exposed to “categories of race, justice, and reconciliation” until attending a “secular university.” It was this experience which “blew up his whole world,” when he realized he had a “racialized lens.” Hall later explains, that even after this revelation, both on a 2016 panel and a 2018 interview, he still considers himself to be a “racist,” due to being “immersed in a culture where” he benefits “from racism all the time.”

For Hall, the term race is not referring to “biology,” but rather, “ideology,” specifically, “power” and “status.” Hall defines “racism,” as “a whole system built on allocating privileges, power, opportunities, in inequitable ways on the basis of race.” In Hall’s world, “Billy Graham and everything surrounding his ministry,” “a lot of it is tied to whiteness.” He even laments the “all white elder board” at his own church, stating “We want to be diverse but we want to have diversity on our terms.” Hall sarcastically follows up this statement with, “We want to [be] multicultural, but not really, because we’re Reformed or Gospel centered . . .” Even Southern Seminary itself, Hall states, in a tone which denotes a problem, is “remarkably white.”

The solution, according to Hall in a 2017 panel, is to first come to terms with the truth. A process he sees as his mission as a historian and theologian. “Everything you thought was true about your tradition, your denomination, your own family . . . I’m going to pull the veil back. And what looked like this narrative of faithfulness and orthodoxy and truth and righteousness and justice. I’m going to peel that back and show you the rotting corpse of white supremacy that’s underneath that surface.”

The second step, in Hall’s words, is to pursue “racial justice,” a phrase that makes “white folks” “very nervous,” especially since in the last few years there has been a “normalization” of “almost explicitly racist [language] in the church.” Racial justice includes pursuing a “global curriculum” influenced by non-White authors. One example given is W. E. B. Du Bois, who Hall admits “would cringe if he were identified as an evangelical,” but justifies by claiming, “there are so many things that haunt Du Bois in his writing that are deeply Christian.” In addition to broadening theological curriculum, Hall asks church leaders how they can “actively seek to share power with” minority “brothers and sisters in Christ.” 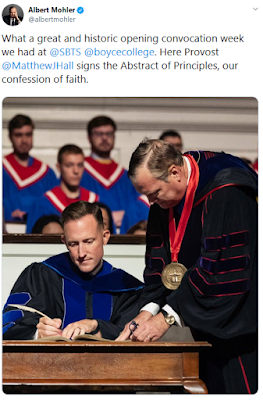 On September 2, Al Mohler, in what appeared to be a defensive maneuver, tweeted a week-old-picture of Hall signing the “Abstract of Principles.” Immediately flooding and dominating the comment section were links to both the compilation video and last week’s article from Enemies Within the Church, “Why Faith Statements Won’t Save Us.” The next day, in a Gospel Coalition blog post, Thabiti Anyabwile asked, “Is there an evangelical social justice movement?” In the article, Anyabwile attempts to defend Jarvis William’s recommendation of Richard Delgado’s “Critical Race Theory,” on the basis of William’s status as a scholar. The author then tries to expand the scope of Christian discipleship to include social justice under the umbrella of Christian ethics.
What looks like a weak deflection from Mohler, and out-of-touch mental gymnastics from Anyabwile, seem to indicate one thing: Our efforts are working. Ignoring the whistle blowers is no longer a viable option for evangelical leaders. The 13-minute compilation of statements from Hall, Jarvis, and Woods has received approximately 5,000 views so far through various platforms. What will a state-of-the-art feature length movie accomplish when it’s released?