Exporting Social Justice: What happens when we send these ideas to the rest of the world?

In consideration of the current swing in American evangelical circles toward social justice, especially in reference to the recent interdenominational conferences, it seems necessary to reflect on what I will call the “consequences of exportation” of social justice ideas to other parts of the world. Any individual who has traveled internationally and has stayed among evangelicals of other nations will be able to attest to the fact that biblically minded Christians in the United States have had a profound influence on the biblically minded church internationally. Our authors are read, our pastors listened to and our theological trends often adopted in churches throughout the world. The reason for this American influence on the international Christian community has everything to do with the freedom and prosperity that the United States has encouraged since its inception – our prosperity has allowed for our influence: the largest mission organizations, the biggest Christian booksellers, the most mega mega-churches and so on. While there have been tremendous blessings from this prosperity and influence, there have also been negative consequences because influence can very easily be corrupted and misused.

The point is this: with the great influence of the American church comes a great responsibility to export biblical truth, not just in an abstract sense, but in carefully considering how theological ideas and constructs are going to affect not only the American church, but the church abroad. And so we come to the exportation of the idea of social justice: how will we affect the international Christian community?

First, for the sake of clarification, the assumed application of social justice is basically this: traditionally or currently oppressed people groups demand or expect contrition and/or repentance from the perpetrators of said oppression (qualifier: the perpetrators don’t need to be alive today, as their posterity can/should repent for them – though it is not necessary to have ancestor perpetrators, as ethnic and cultural markers also are cause for contrition as they may indicate current status of privilege). Once ongoing contrition has been established, the perpetrators need to stand in solidarity with the oppressed group and pursue vague goals of “justice” and “equality,” especially agreeing with the oppressed group on views of history, justice, privilege and even economic policy.  (NOTE: It does not matter if the perpetrators and/or oppressed were individually Christian at the time of injustice – the point of applying social justice is just that, social, and the concern is the reconciliation of both parties)

To develop a picture of what this might look like in several places throughout the world, I’d like to apply the social justice standards to a number of ethnic/cultural hotspots (historical and current). To avoid redundancy, I will stay within roughly the last one hundred years. 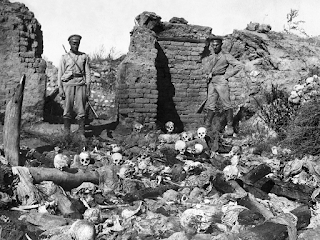 In 1915 and over several years following, well over 1 million Armenian Christians in Turkey were systematically exterminated by the Turkish regime. As the Turkish government has yet to issue any recognition or apology, it is especially crucial for Turkish people, especially Turkish Christians, to recognize and repent for the deeds of their ancestors and for the privilege they enjoy in a nation that has largely been expunged of Armenians. While obviously not all Turks were involved, the application of social justice demands a collective responsibility among Turks in general that created the environment for the genocide to occur. 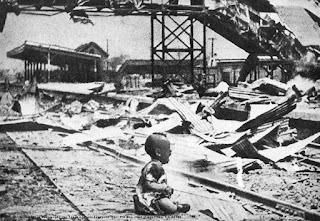 While the holocaust perpetrated by Nazi Germany was egregiously horrific, the actual numbers of those killed somewhat pale in contrast to the genocide perpetrated against the Chinese by the Japanese during their period of expansion in the early 1930s through the mid 1940s during World War II. While death camps were not set up exactly in a way that mirrored the Nazi Holocaust, the horrors of the invasion defy imagination – execution contests, “rape camps,” and even reports of cannibalism. While social justice demands that the Japanese repent for the gross sins committed during the “Rape of Nanking,” Japanese Christians should be the most vocal, as many of their ancestors more than likely served in the Japanese military during the genocide. When comparing Japanese and Chinese standards of living, personal income and social standing in general, there is blatant inequity in privilege – Japanese are far more affluent and live in a system of much greater personal freedom and security when compared to Chinese. Should not Japanese Christians be the most outspoken and lead by example in contrition for these acts that their predecessors perpetrated, as well as recognize the privilege that they enjoy because of the crimes committed against their neighbors?

An especially egregious crime of the 20th century, the Holocaust stands out for its systematic planning of genocide of Jews in Europe. The fact that the genocide was perpetrated out of a traditionally Christian nation speaks volumes – the Christians of Germany must have an attitude of repentance toward their Jewish neighbors, and participate in collective truth-telling about the part their ancestors played  or didn’t – whether or not their ancestors participated directly, there must be collective contrition for creating an atmosphere that allowed for the rise of Adolph Hitler and the Nazi regime – it does not matter that many, even prominent Luftwaffe soldiers were against what was going on or had no knowledge of it (for example, Erwin Rommel), the collective responsibility and necessary repentance must be felt from those with German blood wherever they are in the world, especially considering that they continue to benefit from their privilege in Germany today. 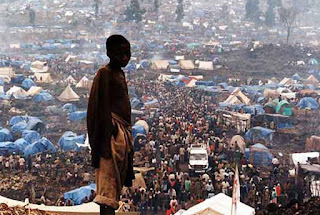 Oppressors: Hutus, Tutsis, Belgians, French, United Nations, United States
Oppressed: Hutus, Tutsis, Belgian soldiers
The Rwandan genocide is one of those horrid events that sticks out in collective memory because of how recent it was – only 24 years ago. Because of this, many are still alive who were either victims of mistreatment at the hands of the Hutu extremists, or were actually participants in the massacre of Tutsi and Hutu moderates from April to June, 1994. While the genocide was primarily a Hutu on Tutsi affair, the collective responsibility stems back over a century, back to the traditional animosity between the two Rwandan tribes, the favoring of the Tutsi over the Hutu during colonization by the Belgians, the supplying of training of the Hutu extremists by the French Government prior to the genocide, the inaction of the United Nations during the genocide and the failure of the Clinton administration to accurately label the event, what it was, a genocide.

While the Nazi perpetrated Holocaust may have been shocking for its systematic efficiency, the shock of the Rwandan Genocide stems from its premeditation and grotesque brutality. Neighbors killed neighbors. Friends killed friends. No one outside Rwanda intervened for over 100 days, and by the time intervention occurred, at least 800,000 Rwandans were dead and millions more displaced. Since the number of those involved in the genocide was so high, many will never be brought to justice.

A brief history: when the Dutch colonists and French Huguenots settled the Western Cape of South Africa in the mid-1600s (after Portuguese discover nearly 200 years earlier), they found a number of native tribes, many who had been oppressing each other for long periods of time. The Dutch settlers practiced some slavery (as did the African tribes already present). Since the Dutch were white and had guns, this made them the worst of the lot. The British came in the mid-1700s and seized the Dutch colony by force. Many of the Dutch fled north into the interior where they were met by the Zulus. The Zulus had been oppressing… essentially everyone around them for some time and were building an empire of sorts. The Voortrekkers (as they were called) defeated the Zulus at the Battle of Blood River – interestingly, their relationship improved afterwards. After about 40 years, several colonies were coexisting in South Africa – the British and the Zulus oppressed each other through armed conflict, the British eventually being victorious. The British then decided to seize more of the Boers (as the Dutch were not called since they weren’t really Dutch any more) land. The Boers won the first war with some of the most incredible long range shooting in history. A decade later the British got smart and built concentration camps to put the Boer families in. The Boers lost. 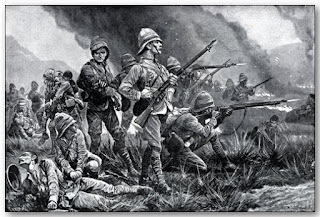 The British ran the show in South Africa from the early to mid 1900s. Besides Christianity, education, hospitals, roads, technology (to the degree that the first heart transplant was done in South Africa), a modernized economy, international business investment and economic stability, the British colonial government brought only oppression. In fact, the oppression was so bad that a young Mohandas Gandhi (of later fame during the Indian Independence Movement) protested so much about being segregated as “colored” and forced to use the same facilities as black Africans (who he saw himself as superior to) that he was put in jail. This helped jump-start his career of not doing things authorities said to do on purpose in order to get arrested. He was very successful in his career, especially posthumously.

After World War II, the British left South Africa to a white minority that immediately began a policy of “apartheid,” which after every systematic genocide mentioned above and every similar event in human history, was the (in the words of Nelson Mandela) “greatest evil in the history of the world.” Black South Africans were oppressed and occasionally murdered by the white ruling party until international pressure and internal upheaval forced an end to the policy and the beginning of the true freedom of democracy – as is popular throughout Africa and with democracy in general, the first free election resulted in one party essentially ruling the country by an 8-2 margin, so far for 24 years. 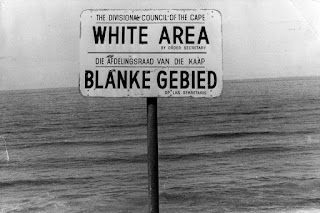 The oppression of the whites during apartheid was reversed through “Black-Economic-Empowerment,” a policy that essentially seizes capital from white businesses when they reach a certain income bracket. Incredibly, this policy saw an exodus of business and a reversal of economic progress in the country. The rapid economic downturn made everyone in the country feel oppressed. At the same time an unprecedented rise in crime led to increased misery all around the country, but especially on the rural farms where white farmers were targeted for murder at genocidal numbers. In 2018 the government decided that all of South Africa’s problems came from the Dutch and British coming in the first place. They also decided that the best fix for this would be taking land from white people and putting it under government control, which they call, “justice.” In the midst of all of this, the “colored” people (“mixed-race” to Americans) were essentially the most oppressed, as they were too small to enjoy any influence. To complicate matters, people from all over Africa are fleeing their countries and coming to South Africa because it’s still better than wherever they’re coming from. The response from some groups of South Africans has been to ostracize, beat and murder them. This is called “xenophobia.”

By the way, the majority of South Africans claim some sort of Christianity.

So, my social-justice-advocating-friend, as you have advocated, those who bear collective and historical  guilt need to recognize past faults, make restitution and identify/rectify current privilege enjoyed  from these past transgressions. I give you 5 international examples of where this should be applied, the last being perhaps the most difficult to sort.