Five Ways to Reform Society Without the Federal Government

What Glenn Beck Should Be Doing
By: Jonathan Harris

Most of you know that I’m wasn’t the biggest fan of Glenn Beck’s “Restoring Honor” rally in Washington D.C. In fact in my previous blog I spent a great deal of time ripping the whole thing apart. Beck has formulated a national god of the least common denominator, or as some of us call it, a “false” god. This god doesn’t ask for much, just that we don’t “kill people,” in the words of Glenn. So as long as we aren’t worshiping a god who says, “kill people,” we’re worshiping the true god I suppose, at least in Beck’s mind. So rather than just criticize what Glenn Beck is doing- let’s at least give him credit that he’s making a valiant attempt to do something- I figured I’d offer up five ideas that actually have some hope of working, and would be well worth the effort. These are the five things Glenn should have done instead of his counterproductive rally. Note: None of them involve the Federal government.

1. How About a Real Revival?

Of course, only God can truly bring about an authentic revival, but He will never do so without the Gospel. So if Glenn had ushered all his sheep into the fold and then actually given them food (the Gospel) instead of poison (humanism), a prerequisite for a true revival would have been met. For all Glenn’s talk about George Whitfield, he forgets that Whitfield was a minister of the Gospel, and individual rights- the freedoms to meet your personal obligatory responsibilities before God- were a result of the unadulterated Gospel. You can’t preach a vague ecumenism and expect that people will see themselves as having an obligation to God because they simply won’t. God is angry at sin and without personal repentance there is no such thing as individual freedom. A real revival doesn’t invoke some nationalistic “we all can agree on” God, it promotes the Holy, Sovereign, Righteous King of the universe whose terms we must meet, not the other way around. America itself is the result of an authentic revival in which something like the Restoring Honor rally would have been a result, not a cause.

So I just alienated half my audience. That’s ok, I’m use to it. The doctrine of State interposition has a history that goes back to the times of Jefferson and Madison who both had a hand in authoring the Virginia and Kentucky Resolutions which nullified the unconstitutional Alien and Sedition Acts. Imagine that? Two states told the Federal government, “You’re breaking your oath to us!” This was back in a day when the states were still able to hold the national government’s feet to the fire. If you carefully read the constitution you’ll notice that the doctrine of “judicial review,” isn’t actually found. In fact, the old saying, “The supreme court interprets the law,” doesn’t even make sense if you read the Constitution. All the supreme court does is apply the law. Nowhere in the Constitution do we see that the Federal courts have the final say. In fact, I believe a better legal argument can be made from the tenth amendment that the States themselves have more of a right to “judicial review” than the courts do. Therefore, it is my humble opinion that the States should reinstate this right. It is rumored that the attorney general of the State of Virginia is currently looking into the possibility of nullifying Obama Care. All of the states opposing it have done so thus far at the level of the court, however if nullification is reasserted, the courts will be bypassed because it is the State that has the final word on whether the Federal government is holding its end of the bargain up. Glenn, why don’t you spend some programs talking about this, and then have a rally outside a State government building encouraging them to pick up this long forgotten tool! 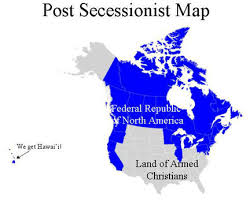 Ok, so now the half that stopped reading when they saw the word “nullification” will be joined by the 90% of those left who just viewed the word “secession”. Well now my loyal 10%, will you seriously consider this even more potent tool against Federal tyranny? We’ve all heard the old line, “Wasn’t secession outlawed during the Civil War.” The answer is, “No it wasn’t.” Seriously, show me what law says a State does not have the right to secede? I’d rather not beat a dead horse, so I’d encourage everyone to read a previous blog on the practicality of the idea entitled, Trending Toward Secession. I would like to however make one point which was not made in the aforementioned article. I have often heard the objection, “A state can’t survive on its own!” I would like to offer one web-page that should totally crush this notion in one simple swoop. Bigthink.com’s State/Country GDP comparison is worth taking a look at.

This is my favorite idea, not just because of its flexibility, but also because it has the most potential of actually working if implemented. The problem unfortunately is implementing it. Millions of people would have to be convinced to leave their homes and jobs in order to form a Christian society. This is not out of the realm of possibilities. I’m reminded of the Boers of South Africa and the Puritans of America. If a mass of Christians saturated a community with their presence creating overwhelming political majorities we would be able to establish a Christian society in which freedom can prosper (That’s what America was originally). There are two ways we could make this happen.

A. We take over a state. We get a bunch of Christians to settle in say Alabama (half of them are there already!). Then we reassert nullification, and if that comes to not we use secession as our weapon.

B. We take over a country. This is a lot more difficult, but there are some unstable African countries which with a couple mercenaries we could easily take over. I know I know, dream on right?

Although a man of Glenn Beck’s popularity could be able to get things moving in this direction, it’s still a rather daunting task. More than likely something like this will happen eventually, but not because we make it happen. Let me illustrate. Old people go to the Carolinas and Florida to retire. Why? For economic reasons mainly. In other words, there’s an incentive. So what happens when Massachusetts, New York, and California start making it illegal for Christians to evangelize, etc. without getting hailed away to jail. Where do you think they’ll move too? Exactly!

5. A Constitutional Amendment Sponsored by States

As many of you may know there are two ways to amend the Constitution.

The second route has never been chosen before, but it’s outlined in the Constitution as being legitimate. All we need are for 2/3 of the State legislatures to call a convention to pass an amendment that abortion is illegal, or the president must show proof of citizenship, or illegal aliens are not entitled to the same privileges as citizens, etc. (you get the picture) and half the battle is over. After that 3/4 of the legislators of the states, or state conventions (think constitutional convention on a small scale) can pass the measure into law. Guess what, the Federal government has no hand in any of this, yet the Constitution allows it! Glenn Beck could have called for a convention of state governors to put something together and reawakened the idea.

So there you have it. Five practical ideas, not involving the federal government, that have a chance at restoring some semblance of a free society in America. I hope at least some of you have been introduced to solutions you hadn’t considered before. If there’s a solution I might have missed simply leave a comment. I’d love to hear from you!