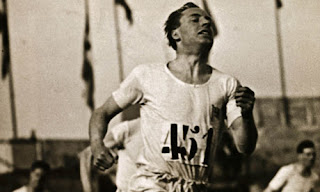 When it comes to entertainment, my primary conviction is to engage in stories that are not a waste of my time. Stories, especially those paired with visually stimulating scenes and musical hooks, are quite capable of dominating the human mind for days after they are experienced. Sometimes I wonder what beneficial thought could be taking the place of the irrelevant film I viewed the night before, if only I had not viewed it! Chariots of Fire is not a story I have to ask this question of. In fact, it is quite the opposite. A film that stimulates the mind to ask beneficial questions—questions such as, “Am I wasting my life pursing the desires before me?” or “Where does true joy come from?”—is a film worth watching. A film that teaches you about yourself and the world around you as it really is a story deserving your time.

Eric Liddell was born in 1902 in the village of Tienstin, China. Though of Scottish stock, his parents were missionaries, and that desire to be a missionary was very much on Liddell’s heart as he grew older. At the age of six, Liddell was enrolled in a boarding school in London, and there he discovered a skill that would set him apart as one of the world’s greatest athletes. He was fast. Very fast. An ability that served him well as a Rugby player, but also a skill that would catapult him into the light of international stardom. The film picks up Liddell’s story right at the point of decision—will he go to China and take over the mission, or will he continue to pursue Athletics. It is not a plot spoiler to inform the reader that Liddell did in fact go back to China, dying in 1945 in a Japanese prison camp, but not before he did something else for the Lord. That “something” is what the film is about. Liddell is faced with more than one crossroad in both the film and real life. What we see in Liddell is a desire to honor God in all things, even above king and country. Was it more pleasing to God to pursue missions over athletics? He is seen quipping, “God made me fast. And when I run, I feel His pleasure.” But what about running on the Sabbath?

Harold Abrahams was born in 1899 to two Jewish parents, his father being an immigrant from the Russian empire, and his mother being of Welsh-Jewish stock. Abrahams has his mind set on one thing—winning. It consumed him. It controlled him. Abrahams wanted to win the Gold Medal for 100 meters sprint, but more than that, he wanted to be the fastest man in the world. One scene in the film portrays Abrahams as being more afraid of winning than of losing, though he feared them both. What will he do with his life once he “made it?” Abrahams is portrayed as trying to prove himself to the world by rising above his Jewish lineage, a conditions he sees as a disadvantage. He’s after acceptance, but it’s not the kind of acceptance a gold medal can bring him. Nor is it the kind of condition a romance can kiss away. Abrahams has internal conflict, just like Liddell, but his goals and therefore the questions he asks of himself are completely different. He doesn’t shake the hands of his fellow competitors before a heat like Liddell does. He doesn’t feel the joy of winning, losing, or even living like Liddell. The question “Why?” needs to be asked.

Both Liddell and Abrahams believe in version of immortality. Abraham’s pursues it by trying to win a medal and break a record. Liddell already knows immortality is his in Christ. He does not have to do anything. Abrahams sees his cultural differences as a weakness to be overcome. Liddell sees his as an opportunity to be used by God. Abrahams is willing to sacrifice anything for the sake of winning. Liddell has some non-negotiables. How they ultimately respond to their circumstances is something for the film to show you. Who really wins the race of life in the long run? So grab some popcorn and let a story run through your mind with eternal implications. (Side note to those especially with children. There is one scene in a locker room in which the backside of a man can be seen in the distance. I don’t think most people would notice it, but it is worth noting in case you plan to watch it as a family.)