What Invictus Forgot to Mention
By: David Harris
Who was (is) Nelson Mandela? Take a trip to your local university and ask the sociology and history professors. Most likely they will go for a trip down civil rights’ memory lane, recalling Du Bois, Dr. King, and then Mandela. Now take a trip over to South Africa. Go to a civil affairs building and ask a government employee what they think of Mandela. The comparison might be a Messianic one. So, what is the truth about Mandela? Is there another side to this “Messianic” figure? A great place to start relevantly is by taking a look at Clint Eastwood’s recent film Invictus.
Ok. Let’s stop there for a moment. What is “Invictus”? Invictus is a poem by William Ernest Henley. Henley was a 19th century British poet/writer who also was a dedicated secular humanist, and possibly atheist. His poetic work Invictus demonstrates the epitome of his humanistic beliefs. The beginning of the poem speaks of thanking “whatever gods may be”, and the end is a pride filled, egotistical, God ignoring train of thought. Looking at this from a Christian worldview is as clear as day and night: Invictus (the poem) is a humanistic product of a devout humanist.
So let’s put that back in the context of the film “Invictus”. Before knowing a thing about what the film deals with we can come to a resolution on its title. I’ll get into the part this humanist work plays in the film a little later on; first let’s deal with some other issues in the film.
First, let’s get one thing clear: I’ve been extremely interested in the character in Nelson Mandela ever since I made my first trip to South Africa in 2009. I really didn’t hear a whole lot of negativity concerning his character when I was there; in fact, I was there during his birthday celebration which might as well be a national holiday in South Africa. I remembered hearing a long time ago some things about Mandela’s socialist tendencies, but didn’t think much about it at the time because I really only heard positive things from my South African companions. I should have given it more thought. 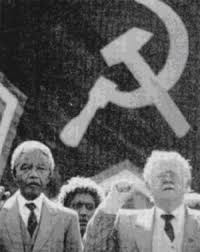 One of the first scenes in the film is a short conversation between a Boer rugby coach and a player. The conversation goes as follows:
A Car drives down street with several cars following in an orderly fashion; there are a group of black kids on one side of the road, and a group of white rugby players on the other side. The cars pass and the black children scream and yell in delight. On the other side of the street a rugby player asks his coach:
Player: Who’s that?
Coach: It’s that terrorist Mandela; remember this is the day that our country went to the terrorists.
Believe it or not, I think that may have been the most honest line in the whole film. Ok, ok, don’t get me wrong, I understand that Mandela’s actions bringing a “peaceful” end to apartheid are a much appreciated thing, and I don’t knock Mandela or those who uphold him for his peaceful intentions during that era. However, I find it somewhat chilling that the same people who embrace Mandela to such a high degree have totally forgotten some extremely important and crucial facts about the life of Nelson Mandela. First of all, I noticed toward the beginning of the film that we NEVER hear about why Nelson Mandela went to prison. The general assumption as to why Mandela spent 28 years in prison would probably be something along the lines of “well… he went to prison because he was against the apartheid system.” This assumption is not at all accurate. Let’s be plain simple here. Even if Nelson Mandela’s life is cleaner than a bar of soap now, he wasn’t always the saint he is made out to be now. Nelson Mandela was imprisoned for convicted of acts of terrorism against the people of South Africa. If you don’t believe he could have had any part in terrorist activity, go look up the “Church Street Bombing”; an event Mandela claimed to have “signed off on”. He signed off on the lives of 19 people including women and children. We could leave it there assume that his worst was “signing off” on this deed, but that would be dishonest as well. His conviction was for over 130 acts of terrorism against the South African people. Am I saying that Mandela personally took the life of fellow South Africans? No. He was the president of the terrorist wing of the ANC (which ironically is the ruling party in South Africa now). So these acts of terrorism were “signed off” by Mandela. The favorite method of murder for these ANC terrorists was called “necklacing”. This is an incredibly brutal form of execution where the victim has a tire doused in gasoline put over him then set on fire. Yes. Mandela “singed off” on this behavior.

Some may be shocked and disbelieving about these facts, but if one really looks at the big picture of Mandela’s life, there really shouldn’t be any shock. Mandela has really been pretty consistent with his worldview. We aren’t surprised at all at the acts of Che, Castro, Pol Pot, or Samora Machel. Mandela isn’t really a whole lot different from the previous in his beliefs; he wrote the book “How to Be a Good Communist”[i]. Communism is probably more than any other ideology of the 20th and 21st centuries, the most brutal: why be surprised over another loyalist carrying out what his worldview decrees?
I could go on about Mandela in true life, but my purpose was to examine Invictus, so we’ll continue from where we left off. Not once. Not once do we hear about why Mandela went to spend 28 years in prison for acts that would have given a death sentence in Britain or the United States. From there the film proceeds to build up Mandela to an almost Messianic figure. Now from what I’ve heard, Mandela is an extremely kind and gracious person, but I don’t see how simply being a kind and “grandfatherly” figure forgives one of the kinds of thing Mandela pleaded guilty to (more on that later). The film is primarily concerned with Mandela’s “uniting the country” by “becoming a fan” of the Springboks, South Africa’s premier rugby team. There’s no argument that this was a brilliant political move, but the film leaves us at that point- only giving us glimpses of what really what were two biggest issues at the time. They were crime and unemployment (and civil war towards beginning of Mandela’s presidency). When Mandela took office in 1994, the average murder rate in South Africa was 7,036 (from 1950-1993). However, during Mandela’s presidency, murder was an average 47,882[ii]. Talk about a spike in crime! Murder isn’t the only crime that shot up; rape, theft, and drug and alcohol abuse also shot up incredibly. Why? And why didn’t Invictus address these more directly (all we get is a newspaper shot)? I would argue that it’s embarrassing to Mandela’s legacy. Years after Mandela’s presidency crimes are still at shameful levels. Mandela’s presidency brought dramatic economic change as well- in the form of a dropping currency and a shameful unemployment.

However, economic changes alone can’t be blamed for the moral disaster in South Africa. This can be attributed to moral corruption. Before Mandela’s presidency abortion in South Africa was strictly illegal, but in December of 1996 Mandela signed one of the most liberal abortion bills in the world- giving any girl at any age the “right” to murder their child[iii]. He pushed through pornography legislation and even wrote into South Africa’s constitution “protection for sexual preferences”. The reason for South Africa’s tragic moral downfall is the shift from a much more capitalistic and Christian society, to a socialist and morally bankrupt society that was spearheaded by the ANC and their Communist leader Nelson Mandela. Now, I’m in no way making an argument for the apartheid government, but you choose: 18,000 killed on all sides during apartheid or an average of over 60,000[iv] murdered unborn children every year now (not counting current “living” murder rates).
Invictus is a very well made, interesting, and inspiring film- but it would be much more enjoyable if it was actually honest. Instead it appears Clint Eastwood was talked into making a multi-million dollar propaganda piece for the ANC. The film matches Mandela’s worldview to a tee, as well as the radical humanist poem that is also its name.
[i] http://www.archive.org/details/HowToBeAGoodCommunist
[ii] http://www.frontline.org.za/articles/gettingaway_withmurder.htm
[iii] http://www.independent.co.uk/news/world/mandela-signs-abortion-bill-1314157.html
[iv] http://www.johnstonsarchive.net/policy/abortion/southafrica/ab-sap.html
Tags:ancapartheidchristian worldviewclint eastwoodinnacurateinvictusmurdernelson mandelapropagandaraperateterrorist