The Twighlight of the American Enlightenment by George Marsden- A Review 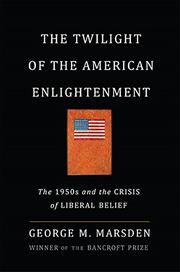 George Marsden’s The Twilight of the American Enlightenment serves as a helpful survey of American social thought from the end of the second world war through the present. While the 1950s were a time of prosperity and stability, many public intellectuals knew this situation was only temporary. The rise of religious pluralism and modernity were already creating angst.

Walter Lippman’s solution was to ground society upon the immovable foundation of natural law. This, Lippman thought, would save liberal principles for future generations. Lippman became largely rejected and ridiculed for his belief in transcendent truth. The intellectual’s solution was instead to be found in Arthur Schlesinger and Daniel Bell’s “balanced,” approach. Democracy would ensure that government furthered goals in the best interest of mankind’s progress. Many problems could be addressed by science, and even those that could not would be examined on a case-by-case basis by the intelligentsia. As a result, specialization trumped tradition and the power centers of the culture took a secular swing toward the “experts.” Religion’s place was relegated to a private sphere in which it could never affect consensus.

The obvious backlash came in the 1970s when the “religious right” mobilized politically against national moral decay. Marsden, I believe, makes a mistake here however. In Marsden’s view, “consensus” liberals were unbalanced by seeing American principles as exclusively spawning from the Enlightenment, to the exclusion of Christianity. Similarly, conservative Christians emphasized Christian principles to the exclusion of the Enlightenment. What little citation he does offer in favor of the latter point is fairly weak. His own assumptions about the founding seem to overemphasize the influence of deism and the role of the Enlightenment.

Even so, Marsden finds in the example of Abraham Kuyper a proposed compromise between the two parties. “Principled pluralism,” which rests on the idea of “common grace,” could allow for fundamental disagreements, while retaining freedom in diverse communities. What Marsden misses, I believe, is that federalism has already been tried and failed. In a country in which a war was already waged in order to keep sovereign states under the dictates of a central government, it seems naive to think that a federal system such as “principled pluralism” could even work. More and more the central authority invades the personal lives of individuals and groups. The major tenants of the Bill of Rights itself are constantly up for debate. In this climate, how could anyone propose a political situation in which biblical conservatives are allowed to continue their influence so long as they do not interfere with the rights of differing communities? Modern liberalism will not even entertain Marsden’s possibility.

The book lead me to conclude that there are no good and practical answers short of a revival. This I believe is helpful, though it was not the point Marsden was making. It causes me to want to focus significant attention on spiritual awakening realizing that my political involvement is a rear-guard action for the glory of God and not the success of the action itself. Still, the information included in the survey of social thought is good. To gain an understanding in what lead the America of the 1950s to the America of today, I would recommend Marsden’s book.