War Without Mercy by John Dower: A Review 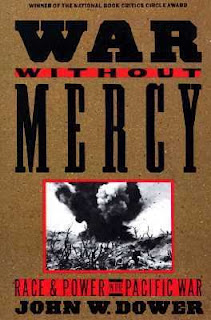 World War II was a conflict that included many wide and divergent motivations among those who participated. However, one aspect of the war has not received the scholarly attention it deserves according to John Dower. “Apart from the genocide of the Jews, racism remains one of the great neglected subjects of World War Two.” In War Without Mercy: Race & Power in the Pacific War, Dower presents his thesis stating that, “To scores of millions of participants, the war was also a race war.” To substantiate this claim, Dower attempts to leave no rock unturned. Wartime propaganda, popular media, cartoons, and direct quotes from scientific, military, and political leaders in Japan, the United States, and to a lesser degree Great Britain are all examined. The book is comprised of three neatly organized sections. The first, entitled “Enemies,” offers a first hand look at how racial animosity affected the conduct of the war. The second two sections, “The War in Western Eyes” and “The War in Japanese Eyes,” serve to give the reader a deeper account of the psychology and philosophy undergirding racially superior attitudes on both sides.

In the first chapter Dower states, “The propagandistic deception often lies, not in the false claims of enemy atrocities, but in the pious depiction of such behavior as peculiar to the other side.” Both the Japanese and the Americans were guilty, according to Dower, of appealing to counterfeit virtue on the part of themselves while maintaining outrage in regard to the atrocities of the enemy. Films like Frank Capra’s “Know Your Enemy – Japan” in the United States, and the Japanese books such as “Read this and the War is Won” or “The Way of the Subject,” all helped shaped public consciousness regarding the other side. Dower notes, “The Japanese thus read Western history in much the same way that Westerners were reading the history of Japan: as a chronicle of destructive values, exploitative practices, and brutal wars.” Racial mistreatment of blacks in the United States and abusive colonial practice on the part of Great Britain became favorite tools in the hands of Japanese propagandists, while Japan’s cruelty toward Chinese civilians was a pawn in the hands of the British and Americans.

Both sides to some extent attributed animalistic tendencies to their enemy upon evolutionary grounds. This was more so the case among the Allied powers, and Dower is quick to point out that the Nazis may have influenced the Japanese in this direction. Japan saved most of her racial prejudice for the other “darker people of Asia” while simultaneously claiming to be their liberator from the West. “From at least the Heian period (794–1185) on, the pale patrician has been idealized in Japan . . .” Therefore, wartime propaganda and newspaper cartoons rather portrayed Western powers as devils, while equivalent American publications painted the Japanese as primates.

Perhaps Dower’s most powerful pieces of evidence come from the illustrations contained in his book. Political cartoons featured in prominent British, American, and Japanese newspapers show what appears to be an obvious racial component. The Japanese are often demeaned as insane and undeveloped in American cartoons, however, after Pearl Harbor, the advent of a menacing Japanese superman makes its way into cartoons as well.

Dower certainly provides some useful research. He shows that race was a component in World War II. There are, however, a few weaknesses worth mentioning. The first weakness is that at certain points Dower seems to overstate his case. For instance, Winston Churchill referring to his Asian allies as “little yellow men” is assumed to be derogatory. It could be, but it may not be. Descriptive language is not always an indication of racism. Dower seems to assume that it is. Even describing a group of people in animalistic terms is not always a clear indication that racial animus was behind the characterization. Since motivations are in play, these are hard waters to navigate, and therefore the benefit of the doubt should be extended whenever possible. Another issue the author has is that he extends his main thesis out to include the relationships the United States had with Japan and the Soviet Union up through the 1980s. “Ultimately, [the race war] brought about a revolution in racial consciousness throughout the world that continues to the present day.” The only problem is, if the Americans were able to transfer their disdain for the Japanese to the Russians it is doubtful that the conflict existed on the basis of race in the first place. Similarly, if the British and Americans thought of their Asian allies in racially inferior terms, as they did the Japanese, then how could race have played a decisive role? It obviously was not decisive enough to keep the Allies from forming alliances with other Asian nations. Perhaps race became an occasion for conflict rather than a cause for conflict. It was perhaps a war than included racial animosity, but not a “race war” in the proper sense.