A Review of “Look Who’s Back” by David Wdendt 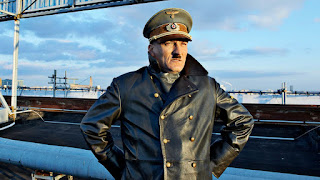 Imagine how one of history’s most notorious mass murderers would react if he awoke in modern day Germany? Imagine no longer for you can now see it for free on Netflix,(although I wouldn’t recommend it),.

Our erstwhile Furher awakens in 2011 Berlin and is promptly confused. He sees a city that is currently not under siege by Russian forces and a noticeable lack of rubble, his first interaction being with three young soccer holigans who he mistakes for Hitler youth. He wanders away into crowds before the Brandenburg gate where he is mistaken for a Hitler impersonator. What follows is a slapstick comedy and possibly the only funny part of the film. Confronting a mime, taking pictures with tourists and being maced by a German mother taking her child out for a stroll before crashing into a newspaper stand and finding out that the year is 2014.
In a strange turn of events he is found by a struggling filmmaker who believes him to be a method actor. What follows is a tour of Germany where Hitler has “unscripted” as per what the film says, interactions with everyday Germans. This style,made famous by “Borat” and “The Dictator” films, plays out again with forgettable humor. The only scene I can remember from this segment is Hitler’s confusion on the new usage of “the n word”. I saw the film 15 minutes ago as of writing this. Of the only non political part of the film that’s all I remember. Ohh and he shot a dog.
The Furher and his antics then get a television show where he begins broadcasting speeches to the masses, who find it funny and comedic. This culminates in a film deal, a quick realization that he’s the real deal and a twist in which Hitler is shot, but only within the film within the film. He then drives off signing copies of his book while he extrapolates on how the current political situation in Europe suits his purposes over footage of different neo Nazis groups and leaders tainted with the extremist brush. Cue dramatic music.

It wasn’t a good film. It had funny parts, but only for those historically astute on the third Reich. It wasn’t nearly as vulgar as “Borat” but neither was it as funny as Bud Abbott and Lou Costello in “Hold that Ghost”. It was a preachy anti Hitler film that utterly failed to prove its own point.

Let me extrapolate on that. I’m not against anti-Nazi films. I love them. The third Reich rightfully deserves to be loathed. However, this film didn’t do that. It’s portrayals of German citizens as xenophobes doesn’t pass the test. Whenever the topic of immigration comes up they speak of crime and how the immigrants are not making Germany better. The film doesn’t show any of this of course but you can find the evidence of that. (Sweden is the rape capitol of Europe, Brussels, Paris, Cologne,). The one neo Nazi they openly interview and insert, (a scripted encounter with an actor), says that he would follow everything Hitler would do ). The attempts to caricature ordinary Germans as Nazis fails. The only only who makes racially charged comments in this film is Hitler, (and it’s only once at the end),.
The film also fails in even making Hitler look bad. When Hitler speaks he speaks about how the mass immigration is changing the German character to a point of it being non German. He speaks about poverty, unemployment and how television exists to distract the masses. He seems rational and that’s the scary thing. Germans by and large begin to support this “actor” without any real opposition, even in Germany. This is simply a ridiculous idea in the era of scrutiny that exists in the modern era but for the sake of film I’ll overlook this nuanced point of everyone loving Hitler because he’s “funny” on the t.v.
Everyone is using him for their careers and the money making opportunity he represents and at this point  the filmmaker who discovered him realizes he’s really Hitler and grows a conscience, (Nazis being okay as just a joke as opposed to being serious apparently), and confronts him with a gun. He talks about how evil Hitler is and Hitler sagely smiles and extrapolates on how people elected him, (not necessarily true but true in spirit), and how everyone is just like him inside  and that he can’t be gotten rid of. He asks if banning elections would make Sawatski, (the director), happy.
What it all comes down to is this, the only argument that this anti-Hitler/anti fascism film puts forth is Hitler himself. His name alone. That’s not an argument for why we should embrace the leftist dream of modern progressives this film obviously supports. I should  like massive immigration of people from nations that hold contrary values to that of one’s own that demand that nation change because Hitler wouldn’t like it? Hitler loved Dogs and hated smoking as well. That doesn’t mean I should strangle my dog and light one up. If you’re going to virtue signal on the merit of one character go all the way. The  fact that this is obviously an allegory for the rise of right wing nationalist leaders in the vein of Nigel Farage and Donald Trump, (despite predating the latter it’s not too far that leftist fans would use the film as a critique of Trump). The sad fact of the matter is that saying “He’s Hitler” isn’t a real argument. The Nazis are evil yes, but if a populace is not intellectually engaged and explained to why you’re not making a case. For me I was taught about the evils of the Third Reich my whole life until certain negative influences started to poke holes and I asked that one question that can destroy world’s. Why?
From a Christian worldview we can provide an answer in the brotherhood of all men under our creator. However this film does not have a Christian worldview. In fact if I recall it portrayed Christians negatively though I can not remember the exact moment or scene, (it’s a very forgettable movie if not for it’s outlandish premise). The issues experienced in Germany were not made up. Inflation, hunger, poverty and national humiliation. Hitler was not an anomaly. In fact he was a logical next step if one looks at history and his sin is no greater or less than the men and women who shared his vision and indeed attempted to carry them out.
The film depicts people as “good” who, while seduced by Hitler’s speeches, would wake up in the end. Hitler and people like him are just evil. But how many people do you think are “like” Hitler? I know I was, possibly still am. Angry, nationalistic and aware. The key difference is Christ who has the power to strip away racial hatred and envy. This film does not have that as it’s premise and thus has no room to condemn. In fact if anything it makes a case for Hitler. If people are so easily led by speeches and “Nazis are under our beds” as the closing monologue would have you believe then what hope does this world have without Christ? All one can truly say is that these things will end only when the title character of “Look Who’s Back” is the Messiah.
The language, the blasphemy, the poor message and obvious leftist smear of everyone to the right of Bernie Sanders as a Nazi make this film unwatchable.
Tags:a review of look who's backchristians and hitlerhitler wakes up movielook whos back david wdendtmovie where hitler wakes up