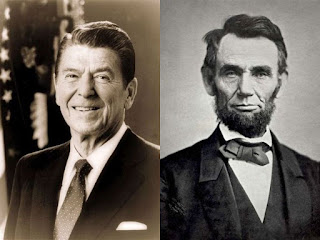 The Gipper casts a long shadow, at least with reference to modern GOP political candidates. We’ve all heard the campaign speeches invoking Reagan’s leadership, praising his accomplishments, and harkening back to the America of the 1980s. Republican voters are still lead to believe every four years that they are voting for Reagan’s next term regardless of the often-time obvious differences between whoever the current nominee is and the 40th president. Nevertheless, Reagan remains the template both for winning and for governing. His cowboy boots are hard to fill, unless of course your name happens to be Abraham Lincoln.

Lincoln and Reagan have a lot in common right? They were both Republican presidents, and today’s Republican candidates are universally obligated to eternally remind us all of this fact. While it may be true that both do share some things in common, such as commitment to a strong military; an honest look at the political philosophy of both men will reveal mutually exclusive principles concerning the structure of the national government. Though perhaps imperfectly, Reagan did attempt to stand in the tradition of Jefferson, a rarity in modern times. Lincoln’s descendants, who are obvious by certain “family resemblances,” can be spotted in both major political parties. Indeed, the quintessential progressive of the early 20th century, Woodrow Wilson, though he had strong feelings for the South (he was born in Virginia), adored Lincoln for his methods, namely his circumnavigation of the Constitution. It is not a stretch to say, there likely would not have been a Wilson, if there were never a Lincoln. The progressive era would either have looked much different, or would not have been progressive.

Many of today’s Conservatives would be appalled to hear the name of their Republican hero sharing an unfavorable mention with a Democrat president like Wilson. This reaction is understandable. They would not want to hear Reagan’s name used in a similar manner. But a significant difference exists between Reagan and Lincoln: a difference so fundamental that it allows Reagan’s reputation to escape Lincoln’s predicament.

Here is a pop quiz to illustrate this difference.

Three quotes are listed below. One comes from the mouth of Ronald Reagan, another is the voice of Abraham Lincoln, and the third is a figure to be revealed on the other side of the quiz. First, try to guess which quotations belong to Reagan and Lincoln. Then, determine which quotation “does not belong.”

The states that make up the American Union are mostly in the nature of territories. . . formed for technical administrative purposes. These states did not and could not possess sovereign rights of their own. Because it was the Union that created most of these so-called states.

The Union is older than the States and, in fact created them as States. The Union, and not themselves separately, procured their independence and their liberty. The Union threw off their old dependence for them and made them States, such as they are.

If you guessed that the second quotation belongs to Lincoln and the third quotation belongs to Reagan you would be correct! Ronald Reagan’s quote is also clearly out of step with the first two and therefore “does not belong.” Now for the unavailing of the mysterious first quotation. The author is neither a member of the Republican nor the Democrat party. In fact, he is not an American at all. The first quotation is actually an excerpt from “Mein Kampf” written by Adolf Hitler. Hitler looked to Lincoln’s centralization of American states as an model by which to centralize the twenty one states of the Weimar Republic. Reagan is the only one of the three who believed that the Federal Government is a creation of, and therefore accountable too, the States.

Reagan’s disagreement with both Lincoln and Hitler is not a trivial one. It is fundamental. Lincoln believed the States ONLY became a legally significant entities at the point in which they adopted the Constitution. “The States have their status in the Union, and they have no other legal status,” he stated. However, was it not delegates from “States” who gathered together in Philadelphia?  Indeed, the Constitution itself reads, “We the people of the United States. . .” Lincoln emphasized the word “people” as a way to create a direct connection between the national government and individual citizens while bypassing the States. What Lincoln missed is that the word “people” was not a substantive insertion. The original draft of the preamble read, “We the people of the states of the States of New-Hampshire, Massachusetts, Rhode-Island and Providence Plantations, Connecticut, etc.” It was the committee on style that decided to withdraw the names of States whose ratifications of the Constitution were pending. Substituting the names of the individual States for “United States,” made the document less presumptions and more marketable.

Lincoln’s vision was for a perpetual national government with a common purpose uninhibited by the varied interests of States. His legacy with respect to this point is undeniable. West Virginia was illegally created by the executive, martial law was declared in parts of Maryland, Tennessee, and Missouri, while States that wished to peaceably secede were invaded. Because of the circumstance of a war, Lincoln was much more successful than Reagan at accomplishing his agenda. For all of Reagan’s effort to give responsibilities usurped by the national government back to the States, he could not even gain the political capital necessary to eliminate the Department of Education. Nevertheless, his vision, inspired by Thomas Jefferson, does live on. Perhaps the turmoil in the Republican party has something to do with this. Two mutually exclusive visions living beside one another represented by two seemingly immovable sacred pillars. Both cannot live together indefinitely. To borrow Lincoln’s utilization of Jesus’ words, “A house divided against itself cannot stand.” Traditional Americans must decide, will they be Reagan Conservatives, or Lincoln Republicans?