What Happened at Wednesday’s Social Justice Q and A at the Shepherd’s Conference? 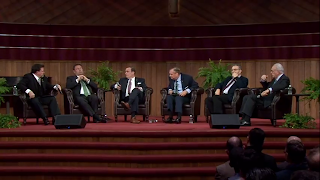 Yesterday, 183 years ago, the first shots of what would come to be remembered as “The Alamo,” rang out across the Texas brush country. Outnumbered by fifteen-to-one, a diverse group of men from six foreign countries and twenty-two states, fought to the last man in what is now hailed as the rallying cry in the war for Texas Independence. Davy Crockett, the famed trailblazer, “Indian-fighter,” and congressman from Tennessee, led thirty men to fight in a battle that some may well have thought was not really his to fight.

In some ways, John MacArthur has become the Davy Crockett of the battle for the gospel (and against social justice) in the church. Even at his own conference he is effectively outnumbered, as yesterday’s Lunch Session Q and A seemed to demonstrate. I’m old enough to remember, when I was a TMS student in 2011, Dr. MacArthur preaching against the religious right. Many of the professors and pastors at Grace Community Church took his ideas farther by discouraging Christian political involvement. In a strange way, the absence of MacArthur’s “culture war” credibility, while making him an unlikely candidate for leading a political charge, has enabled him to keep a much clearer head in challenging social justice.

For MacArthur, this has always been a soteriological issue, which makes him a great communicator to particularly reformed Christians who care about that sort of thing. Since it is (right now) within the “young” reformed camp that the “woke” church movement seems to be making the greatest progress, MacArthur is a good champion to have. I write the following not only to defend MacArthur, but also to explain what happened yesterday with Al Mohler, Ligon Duncan, and Mark Dever, and why it is all significant.

First, there has been a lot of tip-toeing going on as of late. Phil Johnson put an end to that yesterday. This is perhaps the best result of Wednesday’s Q and A. At the risk of giving MacArthur too much credit for what Phil Johnson actually accomplished—John MacArthur would not have been able to take the clear, measured, sage-like demeanor he had without Johnson cracking the eggs so-to-speak. In what social justice advocates are likely to label a “good-cop, bad-cop” routine, Johnson asked tough questions from the left, while MacArthur gave the answers the others should have given, from the right. The figurative fence sitters likely felt surrounded on both sides. The silence was broken. The issue was raised. The contrast was clear.

Al Mohler, who did most of the talking, in an uncharacteristic way, was clear as mud. Satirical clips started emerging within the few hour window the session was made available. (For some reason Wednesday’s Q and A is the only session of the conference, which, as I write this, has been removed). There was one moment early on, in which Mohler deliberately avoided one of Johnson’s questions  in which he was asked why he was not calling out social justice advocates in evangelical circles he was a part of. In general, Mohler spoke with vagueness, Dever spoke with confusion, and Duncan tried to be as agreeable as possible.

Dr. Mohler’s offended posture does not seem congruent with a previous statement to desire “productive conversations” about social justice with men like John MacArthur. During the session, Mohler told Phil Johnson directly that he didn’t “mind” being picked on, to which the audience let out a chuckle, perhaps at the confused reaction of Johnson, or perhaps at the mixed signals Mohler was giving. While Duncan and Dever were laughing at an attempt by MacArthur to lighten the mood, Mohler was not. Mohler also repeatedly hailed his conservative credentials in a very personal way, at one point even challenging Johnson to examine his record. If anything is to be remembered of Wednesday’s Q and A, it will probably be Mohler’s defensive tone.

One memorable quote that is starting to make the rounds was something John MacArthur said.

“I’ll fight error but I won’t fight my friends.”

Some on the anti-social justice side have, perhaps rightly, confessed concern over this. I would like to clarify this statement in light of another one made by MacArthur later though. After Al Mohler figuratively rolled up his sleeves and, in almost a defiant way, told Phil Johnson that “If [signing the Dallas Statement] is going to be a test of fellowship among us, this will be a good time to find out,” MacArthur stepped in. In what became the most clearly articulated and applause receiving statement of the session, John MacArthur gave everyone a window into how he views Mohler, Duncan, and Dever. I have divided his quote into five basic sections.

2. Identifies Error
“The confusion comes when people keep identifying other groups of people as those who suffer. And we have all these new people to deal with who don’t really suffer but there’s a category created for them which makes them a suffering group and we’re trying to figure out how do we deal with that.”

3. Call to Action
“I don’t have a problem with helping poor people or helping people who suffer. . . but if they keep creating new groups who are identified as those who are disenfranchised suffering people they put the evangelical church in a really odd place because now you got all the “me too” people and all the LGBTQ people. . . they keep identifying groups of suffering people and at some point we have to make a biblical stand. We have to say ‘Wait a minute?'”

4. Identifies Enemy
“And you all know that. We all know that. but I think to the culture and some more liberal people they think we’re stopping short of where our Christianity should take us right? We ought to embrace all these groups. I can hardly keep up with all the new ones that are appearing on the surface.”

5. Summary Statement
“So I think for us to find our way to real suffering people dealing with real issues and love them in Christ and care for them and lift them up and maybe provide things for them that they haven’t had in the past in the name of Jesus Christ is fine. But I can’t become a victim of every new group that this culture invents for reasons that have very little to do with helping people and have to do with political power.”

From the preceding statement is it clear that whether right or wrong, MacArthur does not view the three on the panel who have not signed the Dallas Statement as social justice advocates, heretics, or enemies. He does however hint at what he considers the danger to be: That they will fail to stand firm against enemies in the social justice camp. This is an assumption, but I believe MacArthur knows that on one end Mohler is being pressured by Russell Moore, Tim Keller, J.D. Greear, etc. and on the other end he’s being chained to the scripture. This may or may not be correct, but the point is, John MacArthur seems to be connecting dots for Mohler, Duncan, and Dever, because on some level he believes they are not deliberate, but deceived. They are ignorant, not intentional. They are only fence-sitters because they have failed to understand how their fundamental beliefs are contradicted by the social justice advocates surrounding them. Disagreeing with John MacArthur’s strategy, or thinking him to be naive is one thing. Saying he’s buckling is another.

John MacArthur may go down like Davy Crockett did. Time will tell. But the gospel will always prevail. This Q and A went far in exposing how unprepared and calculating an otherwise clear thinker is in responding to the social justice movement. The contrast could not have been more stark. Perhaps in the eyes of broader evangelicalism, Dr. MacArthur will be thought of more negatively as a result of this. But then again, perhaps in the not too distant future people will be saying, “Remember the Shepherd’s Conference of 2019!”

(Side note: This sticks in my craw, so I’ll mention it: At one point Phil Johnson asked a question concerning how often the Southern Baptist Convention apologized for racism/slavery, to which Al Mohler and Mark Dever responded that Johnson was misinformed because it only happened one time in 1995. This is not exactly true. In 1989 there was a statement against racism and bigotry. In 1996 there was a statement on arson in African American churches which focused on racial reconciliation. In 2007 they denounced racism in a resolution on the Dred Scott Decision. In 2015 there was a statement on racial reconciliation. In 2016 there was the statement against the Confederate Battle Flag. In 2017 another statement against racism, including slavery, was adopted. There was a resolution sponsored by Danny Akin in last year’s convention that was essentially another apology. It was not adopted. What was adopted was a statement against the “Curse of Ham,” including using it as a justification for slavery, and yet another statement that condemned among other things, racism. Add to this the various statements written, sponsored, or supported by Southern Baptist entities and one begins to swim in a sea of anti-racist statements that just about all seem to carry a weight of guilt in some way. Don’t believe me? Check out this, this, this, and this (all since President Trump’s election). I’m probably only scratching the surface.)