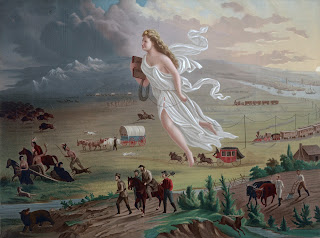 A contemplation of Christian and Marxist historiography
By Jonathan Harris

Eminent historian Dr. Clyde Wilson in one of his many books on American history expresses this sentiment about the “old-style history:”

The historical profession has been used, more than most perhaps realize (because they are often the victims of it), to indoctrinate the masses into an often times anti-Christian view of reality. Dr. Wilson talks about two uses of history: as a symbol for social unity and a record of historical fact. Both are important as can be perfectly observed in the biblical account of the nation of Israel.

The history commonly taught in today’s schools is disjointed however. The record of historical fact is forced to fit a symbol for social unity that it cannot. Dr. Wilson uses the Civil War event as a perfect example of this, but this disjointedness can also be observed at almost every turn in almost all modern mainstream interpretations.

Portions of the historical record are conveniently left out when they do not fit the progressive narrative (symbol of social unity). What children (who then become adults I might add) walk away with is a firmly held conviction that Abraham Lincoln is a hero because “he freed the slaves,” a noble example of social unity indeed if only the historical record matched the symbol. The founding fathers are recruited into the Lincolnian symbol of egalitarian human liberation though the historical record fits this interpretation even less (i.e. Jefferson supposedly wrote of “universal equality” in the Declaration of Independence).

Eventually the symbol can simply not be sustained by the record and a new symbol emerges, not because the record has changed but because the moral framework for judging the record has. The farther away from a Christian ethic the national conscience drifts, the more the old symbols are distorted beyond recognition (i.e. the founding fathers) or destroyed (i.e. Confederate memorials). Over the last decade the symbols of Lincoln and Washington have been painfully stretched to the brink. The rubber band is about to snap, as it has already snapped for symbols of the Old South. As Dr. Wilson writes again:

“The main theme of American history is being shifted from national unity and national achievement to what might be called ethnic multiplicity and ethnic achievement.” (This statement was written in 1982 before it was as obvious as it is in our age that other minority groups, such as homosexuals and transgenders, would start to rise to equal prominence as the overcoming heroes of the national story.) “The new history,” states Dr. Wilson, “has employed the poetic license of mythology without its healing and reconciling motives. It has assumed the prestige of objective, ‘scientific’ history without abiding by its standards.” What Dr. Wilson is saying is rather obvious to someone who thinks in term of presuppositions.

Symbols of national unity are no longer *meant* to bring people together. Swelling with a national pride that comes from an American identity is no longer permissible in the circles of the historian. This is why even supposed Christian historians have thought it morally obligatory to denounce their own country as a place of oppression, apologizing for a past they were not present for as if to perform civil penance for the crime of being a part of it! The intention behind the rising national symbols are rather meant to highlight the sins of the past, often times from a humanistic perspective (i.e. Stonewall national monument). It should be crystal clear that recognizing a moral failing from a biblical perspective is not at all what is being discussed, but rather utilizing a moral failing from a humanist perspective and then recruiting it as a symbol for tearing down national identity. Dr Wilson is again helpful here:

There is a vast difference between the writing of an American history that is a synthesis of the history and experiences of the various groups which have participated in the life of this continent, and presenting the central theme of American history as the mixing of these groups.

Some conservatives would call this new history the servant of politics. Dr. Wilson himself rightly points out that “it is a product of the state and not of the culture.” But there is also something deeply religious about all this. Dr. Wilson laments that, “We historians . . . have surrendered our critical standards when faced with the question of minority contributions to American history.” The new symbols of national unity—or perhaps “disunity”—force the narrative to continue to sacrifice truth along what appear to be Marxist lines, because they are not really about national unity at all. What is at the bottom of all of this? Dr. Wilson hits bedrock when he writes:

A silent shift of America symbolically out of Western civilization, and attempted divorce of American history from that culture which used to be referred to as Christendom, into formless universalism [is the goal].

And now we are right back where we started.

History is interpreted in light of a worldview. The Christian worldview that created the Western world and lead to the formation of the United States is no longer the lens through which the historian views his subject. This shift is MORE than a moral one. It also involves DIRECTION. History is no longer composed of stories leading toward a point of biblical consummation. America is no longer viewed as a place in which men and women ordained by God live, learn, and move toward an eternal purpose with a duty to form their culture into a reflection of that purpose THROUGH the gentle and patient providence of God.

If two words can sum up this whole discussion they would be these. Providence vs. Progress. Modern progressives have infected even Christian institutions of higher learning with the disease that *human* progress is the goal of history. The direction is the liberation of man from the constraints of society and nature. Man is capable himself, without a divine will, of creating utopia in his own image. History itself becomes the tracks on which this train runs toward it’s final destination. The human story is the reflection of the collective mind in its liberated state. History is not recorded as the passive observation of God’s unfolding plan, but rather the active barometer by which to measure humanity’s “progress.”

The Biblical record however gives us a much different historiography, one in which there is a passive acceptance of a divine plan. It is a reflection of the mind of God as the term “fullness of time” suggests. The symbols of social unity were meaningful because they were associated with the “glorious deeds of the Lord” (Psalm 78:4, Josh 4:6), passed down by fathers (as opposed to government schools) (Deut 32:7), meant to bring hope (Rom 15:4) and inspire righteous living (1 Cor 10:11), and injected with a transcendent moral standard with a future consummation. National unity according to the law of God was the goal.

Many do not know that the patriotic hymn “America the Beautiful,” written in 1913 by Katharine Lee Bates contains three verses in addition to the commonly sung first verse. I believe they are appropriate words with which to close this contemplation.

O beautiful for pilgrim feet,
Whose stern impassion’d stress
A thoroughfare for freedom beat
Across the wilderness!
America! America! God mend thine ev’ry flaw,
Confirm thy soul in self-control,
Thy liberty in law!

O beautiful for heroes proved In liberating strife,
Who more than self their country loved,
And mercy more than life!
America! America! May God thy gold refine
Till all success be nobleness,
And ev’ry gain divine!

O Beautiful for patriot dream
That sees beyond the years
Thine alabaster cities gleam,
Undimmed by human tears!
America! America! God shed His grace on thee,
And crown thy good with brotherhood
From sea to shining sea!