You’d Think the 95 Theses Were Nailed?

Yesterday, Founder’s Ministries released the trailer for an upcoming documentary, “By What Standard?” about the dangers of social justice and its impact in the Southern Baptist Convention. Names like Al Mohler, Danny Akin, Jason Allen, and Adam Greenway (presidents of the top four Southern Baptist seminaries) are all included as interviewed participants. Though the trailer suggests a sensible theological and philosophical examination of the movement, within hours, all four seminary presidents made their opposition clear.

Mohler, the president of Southern, stated he was “alarmed” by the trailer, suggesting it was disrespectful and dishonest.

Akin, the president of Southeastern, was “disappointed” that what he described as “edited footage,” was “misleading.” 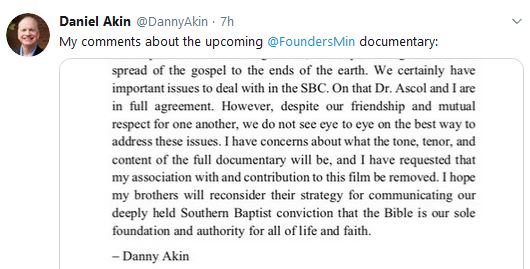 Allen, the president of Midwestern, attacked what he presumed will be an “uncharitable & unhelpful” movie.

Greenway, Paige Patterson’s new replacement at Southwestern, suggested he did not want his interview footage included when he said he would “not be part of an agenda that seeking to divide Southern Baptist unnecessarily.”

Essentially, all four seminary presidents chided Founders Ministries for causing “disunity,” a charge not one of them has dared to publicly level against Southern Baptist Pastor Thabiti Anyabwile, when he proclaimed all whites were complicit in the death of Martin Luther King Jr. Or, how about Southeastern Professor Walter Strickland, who publicly admitted, to the NY Times, that he was teaching the ideas of Liberation Theologian James Cone? Where were these four when Russel Moore, the president of the Ethics and Religious Liberty Commission, said he would attend a gay wedding reception? Nate Collins, a Southern graduate and former faculty member, wasn’t told he was causing disunity when he organized “Revoice,” a conference soft-peddling homosexual orientation.

So, why is Founders Ministries receiving this treatment?

Why is this documentary seen as a threat, while blatant unbiblical behavior is overlooked and often promoted?

Why are Critical Race Theory and Intersectionality, which divide humans along the lines of gender, ethnicity, culture, and sexual preference, not opposed as strongly as the trailer for this new documentary?

Elites in the Southern Baptist Convention are happy to be invited for a philosophical discussion about social justice as long as no one names names. The unity they believe in is the kind that won’t get them in trouble with their board of trustees. It’s the kind that ensures conferences go smoothly, books are endorsed, and the media won’t run a hit piece. It’s the kind that keeps money from both pews and Leftist organizations flowing simultaneously.

It’s not the kind of unity that whittles someone down to twelve disciples because they publicly stood for truth and rebuked a self-righteous religious establishment.

Here’s the interesting thing though: “By What Standard?” is presented as a philosophical documentary, only occasionally veering into personal examples of blatant error, usually articulated by lesser-known Southern Baptists. Still, this is too close for comfort to those overseeing the training of the SBC’s next generation of pastors.

Imagine what they’ll do when “Enemies Within the Church” comes out which IS naming names, exposing Leftist money, and attacking the broad threat toward all Christendom posed by the social justice movement?